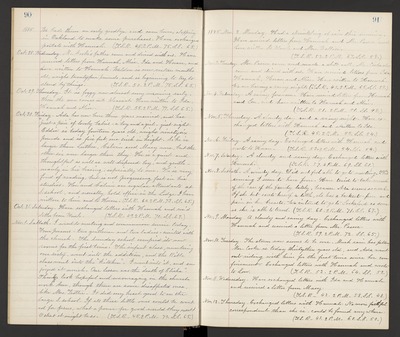 Oct. 28. Wednesday. Mr. Cooke's father came and dined with us. Have received letters from Hannah, Alice, Ida and Horace, and have written to Hannah. Weldon is now sixteen months old, weighs twentyfour pounds, and is beginning to try to stand by things. (T.S.R. 50. 2 P.M. 75. S.S. 65.)

Oct. 30. Friday. Ada has now been three years married, and has "just a pair" of lovely babies - a boy and a girl - just right. Eddie is today fourteen years old, weighs ninetysix pounds and is five feet, one inch in height. So he is larger than Luther, Calvin and Mary were, but the other six were larger than they. He is a quiet and thoughtful as well as well-disposed boy, and gentlemanly in his bearing. especially to me. He is very fond of reading, but is not progressing fast in his studies. He and Calvin are regular attendants at S. school, and usually hold office in the Lodge. I have written to him and to Horace. (T.S.R. 60. 2 P.M. 73. S.S. 65.)

Nov. 1. Sabbath. I went to meeting and communion service today. Four persons - two gentlemen and two ladies - united with the church. The Sunday school occupied its new rooms for the first time. The infant class, numbering over sixty, went into the addition, and the Bible class went into the "kitchen". I went into it, and enjoyed it much. Our lesson was the "death of Elisha". Things look hopeful and encouraging in the church work here, though there are some disaffected ones, like Mrs. Trotter. It did my heart good to see the large S. school. If all these little ones could be counted for Jesus, what a power for good would they exert! O that it might be so. (T.S.R. 45. 2 P.M. 70. S.S. 65.)

Nov. 8. Sabbath. A windy day. Did not feel able to go to meeting. This evening I seem to have fever. Have tried to take much of the care of the family lately, because Ada seems so weak. If she but exerts herself a little, she has a backset - fever and pain in her breasts. We intend to go to Lockeford as soon as she is able to travel. (T.S.R. 60. 2 P.M. 71. S.S. 67.)

Nov. 10. Tuesday. The storm now seems to be over. Much rain has fallen. Mr. Cooke is today thirtythree years old, and Ada went out riding with him for the first time since her confinement. Exchanged letters with Hannah and wrote to Lou. (T.S.R. 52. 2 P.M. 64. S.S. 52.)