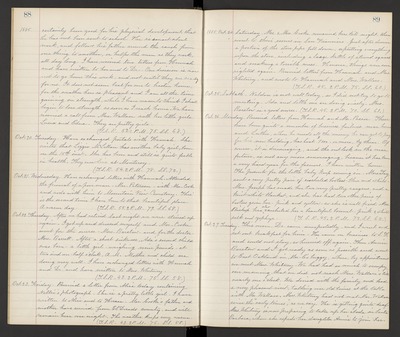 1885. certainly been good for his physical development, that he has not been sent to school. He is smart about work, and follows his father around the ranch from one thing to another, or helps the men as the work, all day long. I have received two letters from Hannah and have written to her and to Dr. Our decision is now not to go home this week, and not until they are ready for us. It does not seem best for me to hasten home, for the weather here is pleasant and I am all the time gaining in strength, while I have reason to think I shall begin to lose strength as soon as I reach home. We have received a call from Mrs. Wallace with her little girls Lucia and Edna. They are pretty girls. (T.S.R. 52. 2 P.M. 75. S.S. 68.)

Oct. 22. Thursday. After we had retired last night we were stirred up again. I got up and dressed myself and Mr. Cooke went for the nurse - Mrs. Barstow - and for the doctor - Mrs. Barrett. After a short sickness, Ada's second child was born - a little girl - weighing nine pounds - at two and one-half o'clock, A.M. Mother and child are doing very well. I have exchanged letters with Hannah and Dr. and have written to Mrs. Whitney. (T.S.R. 43. 2 P.M. 75. S.S. 58.)

Oct. 23. Friday. Received a letter from Alice today containing Nellie's photograph. She is a pretty little girl. I have written to Alice and to Horace. Mr. Cooke's father and mother have arrived from El Dorado county, and will remain here overnight. The weather keeps very warm. (T.S.R. 43. 2 P.M. 75. S.S. 58.)

1885. Oct. 24. Saturday. Mr. & Mrs. Cooke remained here till night, then went to their rooms in San Francisco. Just after dinner a portion of the stove pipe fell down, upsetting everything upon the stove, including a large kettle of stewed squash and making a terrible mess. However, things were soon righted again. Received letters from Hannah and Mrs. Whitney, and wrote to Hannah and Mrs. Wallace. (T.S.R. 45. 2 P.M. 75. S.S. 60.)

Oct. 26. Monday. Received letters from Hannah and Mr. Pascoe. There have been quite a number of business failures near home and Luther, when he needs all the money he can get to pay for his new building, has lost $9000. or more, by them. Of course, it is discouraging, and the outlook in the near future, is not any more encouraging, because it has been a very hard year for the farmers. I have written home. The presents for the little baby keep coming in. Mrs. Fay sent a very pretty pair of crocheted bootees - blue and white - Mrs. Joseph has made her two very pretty sacques, and a knit white blanket, and she has had two other pairs of bootees given her - pink and yellow - so she is well fixed. Mrs. Bishop has also crocheted her a beautiful bonnet - pink & white - silk and zephyr. (T.S.R. 45. 2 P.M. 73. S.S. 62.)

Oct. 27. Tuesday. This morn. Dr. came unexpectedly, and I went and set out breakfast for him. He came on business to S. F. and could not stay, so hurried off again. Then Annie Barstow and I got ready as soon as possible and went to East Oakland in Mr. C's buggy, where, by appointment we met Mrs. Whitney. We had had so much to occupy our morning, that we did not reach Mrs. Wallace's till nearly one o'clock. We dined with the family and had a very pleasant visit, talking over old times at the table with Mr. Wallace. Mrs. Whitney had not met Mr. Wallace since the "early times," as we say. He is getting quite deaf. Mrs. Whitney is now preparing to take up her abode in Santa Barbara, when she expects her daughter Annie to join her.