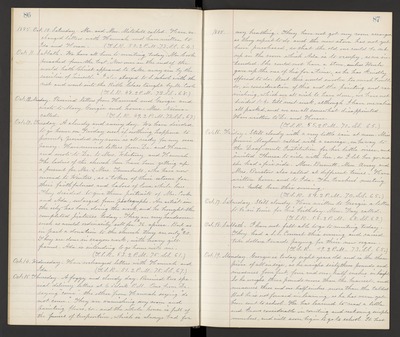 Oct. 13. Tuesday. A cloudy and rainy day. We have decided to go home on Friday next if nothing happens to prevent, provided my room is all ready for my occupancy. Have received letters from Dr. and Horace and wrote to Dr. to Mrs. Whitney and Hannah. The ladies of the church here have been getting up a present for Mr. & Mrs. Trumbull, who have now moved to Winters, as a token of their esteem for their faithfulness and labors of love while here. They decided to give them portraits of Mr. Cooke and Ada, enlarged from photographs. An artist in the city has been doing the work, and he brought the completed pictures today. They are very handsome - such as would ordinarily sell for $36. a piece. But as in part a donation to the church they are only $20. They are done in crayon work, with heavy gilt frames. Ada is intending to go home with me. (T.S.R. 53. 2 P.M. 75. S.S. 61.)

Oct. 15. Thursday. A foggy and cloudy day. Received two special delivery letters at 6 o'clock P.M. One from Dr. saying "come" - the other from Hannah saying "do not come." They are varnishing my room and painting floors, &.c. and the whole house is full of the fumes of turpentine, which is always bad for

1885. my breathing. They have not got my room arranged as they expect to do and the new stove has not yet been purchased, so that the old one could be set up in the room which Ada is to occupy, as we intended. She could not have a stove, unless Uncle gave up the use of his for a time, as he has kindly offered to do. But this would involve too much trouble so, in consideration of this and the painting and varnishing, which we all wish to have done, we have not decided to go till next week, although I have one valise all packed, and we are all somewhat disappointed. Have written to Dr. and Horace. (T.S.R. 55. 2 P.M. 70. S.S. 65.)

Oct. 16. Friday. Still cloudy with a very little rain at noon. Miss Jennie Mayhew called with a carriage, on he way to the Deaf-mute Institution for her little niece, and invited Theresa to ride with her, so I let her go, and she had a fine ride. Mrs. Burnett, Mrs. Avery and Mrs. Barstow also called at different times. Have written home and to Ida. The teachers' meeting was held here this evening. (T.S.R. 54. 2 P.M. 70. S.S. 65.)

Oct. 19. Monday. Georgie is today eight years old and is the champion of all in size, as he weighs sixtythree pounds and measures four feet, four and one-half inches in height. So he weighs three pounds more than the heaviest, and measures three and one-half inches more than the tallest. But he is not forward in learning, as he has never yet been sent to school. He has learned to read a little and knows considerable in counting and reckoning simple numbers, and will soon begin to go to school. It has