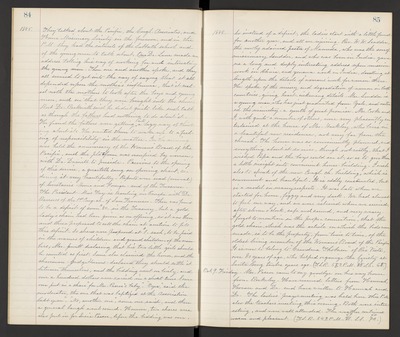 1885. They talked about the Pacific, the Congl. Associates, and Home Missionary Society in the forenoon, and in the P.M. they had the interests of the Sabbath school and of the young men to talk about. Our Dr. Lane made an address telling his way of working for and interesting the young men. Then one and another spoke, and they all seemed to get into the way of saying that it all depended upon the mother's influence, that it rested with the mothers to look after the boys and young men, and see that they were brought into the church. But Dr. Beckwith said he didn't quite like such talk, as though the fathers had nothing to do about it. He feared the fathers were getting into a lazy way of thinking about it. He wanted them to wake up to a feeling of responsibility in the matter. In the evening was held the anniversary of the Woman's Board of the Pacific, and the platform was occupied by women, with Dr. Dewinell to preside. Previous to the opening of this service, a quartette sang an opening chart, rendering it very beautifully. Reports were read (annual) of Secretaries - Home and Foreign - and of the Treasurer. The President - Miss Fay - is traveling in Europe with Dr. Barrows of the 1st Cong. ch. of San Francisco. There was found to be a deficit of some $80. in the Treasury, but a gold lady's chain had been given as on offering, so it was then and there proposed to sell the chain at auction to fill this deficit. So shares were proposed at $1. each, to be paid in the names of children and grand children of the members. Mr. Jewett declaring that his two little girls should be counted as first. Some else claimed the honor, and the chairman - Judge Havens - declared they should settle it between themselves, and the bidding went on lively, and over a hundred dollars were raised in a short time. Some one put in a share "for Mr. Pascoe's baby". "Oyes," said the moderator, the one that was baptized at the Association last year". "No, another one", some one said, and then a general laugh went round. However, two shares were also put in for Susie Pascoe, before the bidding was over.

1885. So instead of a deficit, the ladies start with a little fund for another year, and all are rejoicing. Rev. W. W. Scudder, the newly ordained pastor of Alameda, who was the son of missionary Scudder, and who was born in India, gave us a long and deeply interesting address upon mission work in China, and zenana work in India, dwelling at length upon the details of "woman's work for women" there. He spoke of the misery and degradation of women in both countries, giving heart-sickening details. Mr. Scudder is a young man, who has just graduated from Yale, and entered the ministry - a youth of great promise. Mr. Cooke and I, with quite a number of others, were very pleasantly entertained at the house of Mr. Hackley, who lives in a beautiful new residence, not very far from the church. The house was so conveniently planned, and everything about it so nice, though not costly, that I wished Papa and the boys could see it, so as to give them a little insight into convenient house-building. I wish also to speak of the new Congl. ch. building, which is convenient and beautiful. It is oddly constructed, but is a model in many respects. It was late when we started for home, foggy and very dark. We had almost to feel our way, and we were relieved when we arrived, after eleven o'clock, safe and sound, and very weary. I forgot to mention in the proper connection, that the gold chain, which was the article on which the bids were made, is to be the property, from time to time, of the oldest living member of the Womans' Board of the Pacific. It is now to belong to "Grandma Thoburn" of Rio Vista, over 80 years of age, who helped organize the Society at Santa Cruz twelve years ago. (T.S.R. 55. 2 P.M. 73. S.S. 65.)

Oct. 9. Friday. Mr. Pascoe came to say goodbye on his way home from Berkeley. Have received letters from Hannah, Horace and Dr. and have written to Hannah and Dr. The ladies' prayermeeting was held here this P.M. also the teachers' meeting this evening. Both were interesting, and were well attended. The weather continues warm and pleasant. (T.S.R. 54. 2 P.M. 69. S.S. 60.)