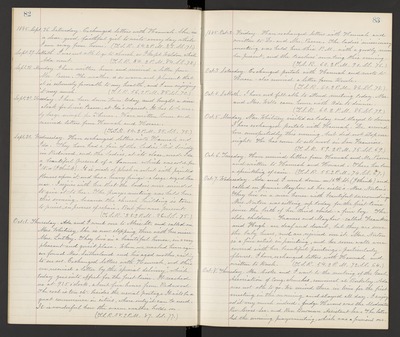 Sept. 30. Wednesday. Have exchanged letters with Hannah and Ida. They have had a fair of the Ladies' Aid Society in Redwood, and the ladies, at its close, made Ida a beautiful present of a banner which was sold for $15.00 (I think). It is made of plush or velvet with painted flowers upon it, and has a heavy fringe - a large-sized banner. I rejoice with her that the ladies were minded to give it to her. The prayer meeting was held here this evening, because the church building is torn to pieces, in process of repair. But few were present. (T.S.R. 58. 2 P.M. 86. S.S. 75.)

Oct. 1. Thursday. Ada and I went over to Alice St. and called on Mrs. Whitney. She is now stopping there with her niece - Mrs. Lutkey. They live in a beautiful house, in a very pleasant and quiet place. When we reached home again we found Mrs. Sutherland and his aged mother, waiting to see us. Exchanged letters with Hannah, and this eve received a letter by the "special delivery", which today goes into effect for the first time. It reached us at 9:5 o'clock, about five hours from Redwood. The cost is ten cts. besides the usual postage. It will be a great convenience in cities, where only it can be used. It is wonderful how the warm weather holds on. (T.S.R. 58. 2 P.M. 87. S.S. 77.)

Oct. 5. Monday. Mrs. Whitney visited us today and stayed to dinner. I have exchanged postals with Hannah. Dr. arrived here unexpectedly this evening, but did not stop over night. He has come to sell wool in San Francisco. (T.S.R. 59. 2 P.M. 75. S.S. 69.)

Oct. 7. Wednesday. Ada and I went down on 16th St. (I think) and called on Jennie Mayhew at her sister's - Mrs. Norton's. They live in a nice house with beautiful surroundings. Mrs. Norton was sitting up today for the first-time since the birth of her third child - a fine boy. The elder children - Frances and Mayhew called Frankie and Hugh - are deaf and dumb, but they are sure the baby hears, and are rejoice over it. Mrs. Norton is a fine artist in painting, and her room walls were covered with her beautiful paintings - particularly flowers. I have exchanged letters with Hannah and written to Uncle. (T.S.R. 54. 2 P.M. 72. S.S. 64.)

Oct. 8. Thursday. Mr. Cooke and I went to the meeting of the Genl. Association of Cong. churches convened at Berkeley. Ada was not able to go. We arrived there in time for the first meeting in the morning and stayed all day. I enjoyed it very much indeed. Judge Havens was the Moderator Rev. Cross-Sec. and Rev. Bowman Assistant Sec. The latter led the morning prayermeeting, which was a precious one.