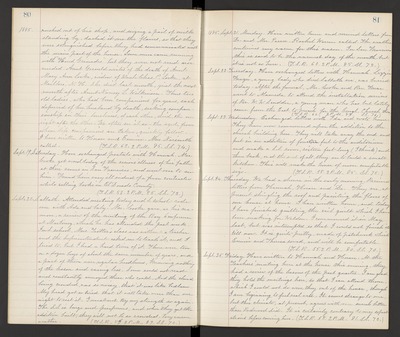 1885. rushed out of his shop, and seizing a pail of milk standing by, dashed it over the flames, so that they were extinguished before they had communicated with the main part of the house. Some men came running with "Hand Grenades" but they were not used nor needed. Aunt Gerould writes of the death of Aunt Mary Ann Locke, widow of Uncle Chas. P. Locke, at Marlboro, N.H. She died last month, just the next month after Aunt Nancy L. Wilkinson. Thus two old ladies, who had been companions for years, each deprived of her husband by death, seeking companionship in their loneliness, of each other, died, the one right after the other. We often see it so - the aged, from whom life companions are taken, quickly follow. I have written to Horace and Eunice. Mrs. Naismeth called. (T.S.R. 62. 2 P.M. 85. S.S. 74.)

Sept. 19. Saturday. Have exchanged postals with Hannah. Mr. Cooke got word today of the serious illness of his father at their rooms in San Francisco, and went over to see him. Found him very ill indeed of a fever contracted while selling books in El Dorado County. (T.S.R. 58. 2 P.M. 85. S.S. 72.)

Sept. 20. Sabbath. Attended meeting today and S. school rode over with Ada and baby. Mr. Cooke gave, as his sermon, a review of the meeting of the Bay Conference at Martinez, which he has attended the past week. In S. school, Mrs. Trotter's class was without a teacher and the Superintendent asked me to teach it, and I tried to, but I had a hard time of it. There were ten or a dozen boys of about the same number of years, and a part of them were regular hoodlums, knowing nothing of the lesson and caring less. Some could not read and constantly annoyed those who could. And the church being crowded, was so noisy, that it was like bedlam. My head got so tired that it will take more than one night to rest it. I must not try my strength so again. The S.S. is large and prosperous, and when they get the addition built, they will not be so crowded. Very warm weather. (T.S.R. 56. 2 P.M. 89. S.S. 70.)

Sept. 22. Tuesday. Have exchanged letters with Hannah. Lizzie Frazer, a young lady who died Sabbath eve, was buried today. After the funeral, Mr. Cooke and Rev. Freas went to Alameda to attend the installation services of Rev. W. W. Scudder, a young man who has but lately come from the East to preach for the Congl. Church there. (T.S.R. 60. 2 P.M. 89. S.S. 74.)

Sept. 23. Wednesday. Exchanged letters with Ida and wrote home. They have now commenced upon the addition to the church building here. They will take away the end and put in an addition of four feet to the auditorium and make a S.S. room, sixteen feet long (I think) and then back, or at the end of all, they are to build a small kitchen. This will make the house of more comfortable size. (T.S.R. 58. 2 P.M. 85. S.S. 75.)

Sept. 24. Thursday. We had a shower in the early morning. Received letters from Hannah, Horace and Dr. They are, at present shingling the roof and painting the floors of our house at home I have written home, and today I have finished quilting the crib quilt which I have been making for Weldon. I commenced it in May last, but was interrupted, so that I could not finish it till now. It is quite pretty, made of patchwork which Eunice and Theresa sewed, and will be comfortable. (T.S.R. 55. 2 P.M. 80. S.S. 70.)

Sept. 25. Friday. Have written to Hannah and Horace. At the Teachers' meeting here at the house this evening, they had a review of the lessons of the past quarter. I am glad they hold the meetings here, so that I can attend them, which I could not do were they out of the house, though I am beginning to feel real well. It seems strange to me, but this climate, at present, agrees with me much better than Redwood did. It is certainly contrary to my expectations before coming here. (T.S.R. 55. 2 P.M. 81. S.S. 70.)