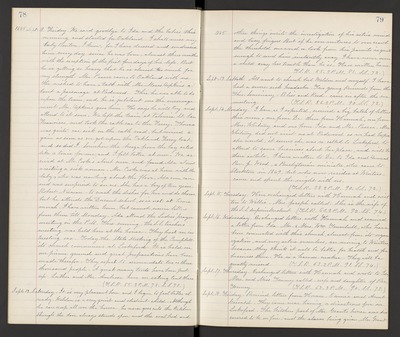 1885. Sept. 11. Friday. We said goodbye to Ida and the babies this morning and started for Oakland. I shall miss my baby Benton, I know, for I have dressed and undressed him every day since he was born, almost three months with the exception of the first four days of his life. But he is getting so heavy that he is almost too much for my strength. Mr. Pascoe came to Oakland with us. He wished to have a talk with Mr. Moses Hopkins about a parsonage at Redwood. This he was able to do upon the train, and he is jubilant over the encouragement Mr. Hopkins gave him. He says he will try and attend to it soon. We left the train at Valencia St. San Francisco, and took the cable car to the Fury. Theresa was quite ear sick on the cable road, but revived again as soon as we got upon the Oakland Ferry boat, and so did I. Somehow the breeze from the bay acted like a tonic for me, and I felt better at once. We arrived at Mr. Cooke's about noon, and found Ada absent visiting a sick woman. Mr. Cooke was at home with the baby, who was crawling about the floor. Ada soon came and was surprised to see us. She has a boy of ten years, Robert Nieman - to wash the dishes for her and do chores, but he attends the Durant school, so is not at home much. I have written home, but cannot receive letters from them till Monday. Ada attend the Ladies' prayer meeting in the P.M. This evening, the S.S. teachers' meeting was held here at the house. They had an interesting one. Today the State Meeting of the Campbellite church commences at Lockeford. It is held on our picnic ground and great preparations have been made therefor. They expect to accommodate two or three thousand people. A great many tents have been put up. Luther and Mr. Ambrose have an eating tent there. (T.S.R. 55. 2 P.M. 78. S.S. 70.)

Sept. 12. Saturday. It is very pleasant here and I begin to feel better already. Weldon is a very quiet and obedient child. Although he can creep all over the house, he never goes into the kitchen though the door always stands open and the coal hold and

1885. other things invite the investigation of his active mind and busy fingers. But if he ever ventures to over crawl the threshold one word or look from his parents is quite enough to send him instantly away. I have never seen a child any less trouble than he is. Have written home. (T.S.R. 55. 2 P.M. 81. S.S. 72.)

Sept. 14. Monday. I have, as I expected, received a big batch of letters this morn - one from Dr. three from Hannah, one from Mrs. Whitney and one from Ida and Mr. Pascoe. Mrs. Whitney did not visit us at Redwood as we had hoped she would, it seems she was re-called to Lockeford to attend to some business about her place, and will be there awhile. I have written to Dr. to Ida and Hannah. Rev. J. Wood, a Presbyterian minister who came to Stockton in 1849, but who now resides at Winters, came and spent the night with us. (T.S.R. 58. 2 P.M. 90. S.S. 72.)

Sept. 16. Wednesday. Exchanged letters with Hannah and received a letter from Ida. Mr. & Mrs. Wm. Trumbull, who have been connected with this church, almost from its organization, and very active members, are morning to Winters, because they think it will be better for health and for business there. He is a harness-maker. They will be greatly missed. (T.S.R. 63. 2 P.M. 91. S.S. 74.)

Sept. 18. Friday. Received letters from Horace, Eunice and Aunt Gerould. They came near having a disastrous fire in Lockeford. The kitchen part of Mr. Grant's house was discovered to be on fire, and the alarm being given, Mr. Grant