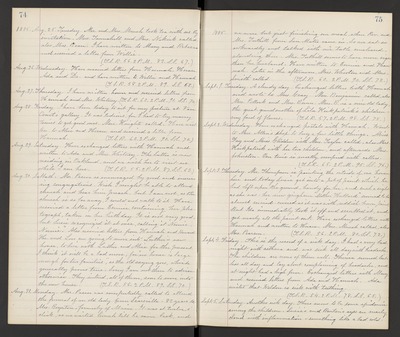 Aug. 30. Sabbath. Mr. Pascoe is encouraged by good and increasing congregations. Wish I might be able to attend church and hear him preach, but I am not, as the church is so far away, I could not walk to it. Have received a letter from Eunice, containing her photograph, taken on her birthday. It is not very good, but Susie recognized it at once, calling it "Nunie, Nunie." Also received letters from Hannah and Howard. He and Lou are going to move into Luther's new house, to live with Luther and Alice for the present. I think it will be a bad move, for "no house is large enough for two families", as the old saying goes, which generally proves true. Sorry I am not there to advise otherwise. They intend, all of them, soon to move into the new house. (T.S.R. 56. 2. P.M. 89. S.S. 70.)

Aug. 31. Monday. Mr. Pascoe was unexpectedly called to attend the funeral of an old lady from Searsville - 82 years old. Mrs. Boynton - formerly of Maine. It was at twelve o'clock, so we waited lunch till he came back, and

1885. we were but just finishing our meal, when Rev. and Mrs. Tuthill from San Mateo came in. So we sat so awkwardly and talked with our table uncleared, standing there. Mrs. Tuthill seems to have more vigor than her husband. Have written to Eunice and Hannah. Later in the afternoon, Mrs. Whooton and Mrs. Smith called. (T.S.R. 60. 2 P.M. 90. S.S. 72.)

Sept. 3. Thursday. Mr. Thompson is painting the outside of one house here and today Susie got into a pot of paint which he had left upon the ground, handy for her, and such a sight as she was - her new gingham "Mother Hubbard" seemed to be almost ruined - covered as it was with reddish-brown paint. But Ida immediately took it off and scrubbed it, and got nearly all the paint out. Have exchanged letters with Hannah and written to Horace. Mrs. Murch called, also Mrs. Pearson. (T.S.R. 56. 2 P.M. 80. S.S. 72.)

Sept. 4. Friday. This is the record of a sick day. I had a very bad night with asthma and was sick all day with headache. The children are none of them will. Theresa seemed listless all day and lay about complaining of headache, and at night had a high fever. Exchanged letters with Mary and received letters from Ada and Hannah. Ada writes that Weldon is sick with teething. (T.S.R. 54. 2 P.M. 78. S.S. 65.)

Sept. 5. Saturday. Another sick day. There seems to be some epidemic among the children. Susie's and Benton's eyes are nearly closed with inflammation - something like a bad cold.