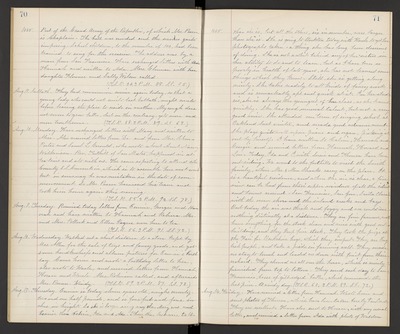 1885. Post of the Grand Army of the Republic, of which Mr. Pascoe is Chaplain. The hall was crowded and the services quite imposing. School children, to the numbers of 100, had been trained to sing for the occasion. The address was by a man from San Francisco. Have exchanged letters with Hannah and written to Ada. Mrs. Glennan with here daughter Florence and Sally Wilson called. (T.S.R. 54. 2 P.M. 88. S.S. 65.)

Aug. 9. Sabbath. They had communion service again today, so that a young lady who could not unite last Sabbath, might unite before leaving the place to reside in another. My cough does not seem to grow better, but on the contrary, gets more and more troublesome. (T.S.R. 58. 2 P.M. 89. S.S. 63.)

Aug. 10. Monday. Have exchanged letters with Mary and written to Alice. Also received letters from Dr. and from Mrs. [?] Porter and Saml. L Gerould, who wrote about Aunt Nancy Wilkinson. Rev. Tuthill of San Mateo, happened in at tea-time and ate with us. He came expecting to attend the County S.S. Convention, which is to assemble here next week but in some way he was mistaken in the date of commencement. So Mr. Pascoe harnessed his team and took him home again this evening. (T.S.R. 55. 2 P.M. 92. S.S. 78.)

Aug. 12. Wednesday. Walked out a short distance to a store kept by Mrs. Allen for the sale of toys and fancy goods, and got some handkerchiefs and album pictures for Eunice's birthday. Came home and wrote a birthday letter to her, also wrote to Uncle, and received letters from Hannah, Horace and Uncle. Mrs. Robinson called, and afterwards Mrs. Bunn. Windy. (T.S.R. 59. 2 P.M. 87. S.S. 72.)

Aug. 13. Thursday. Eunice is today eleven years old, weighs seventytwo and one half pounds, and is four feet and four inches in height. So she is larger every way than Mary was and heavier than Calvin, Ida and Ada. These three last were taller

1885. than she is, but all the others, six in number, were larger than she is. She is going to Stockton today with Uncle to get her photographs taken - a thing she has long been desirous of doing. She is not awhile behind any of her sisters in her ability to do and to learn, but as I have been so poorly in health of late years, she has not learned some things which they knew. Still, she is getting along nicely. She takes readily to all kinds of fancy work and is remarkably apt and quick at it. In her studies, she is always the youngest of her class, as she learns quickly. She has good musical talent, but not a very good voice. She attended one term of singing school at Oakland last winter, and made good advancement. She plays quite well upon piano and organ, picking it out by herself. I have written to Calvin, Hannah and Georgie and received letters from Hannah, Howard and Lou. Today, Ida and I, with Susie and Theresa have been out riding. We went to the foothills to visit the Smith family, where Mr. & Mrs. Shanks carry on the place. It is a beautiful residence, and where the air is clear, a fine view can be had from their upper windows of all the cities and towns around - San Francisco, San Jose, Santa Clara with the ocean shore and the inland creeks and bays. But today the air was thick and foggy and we could see nothing distinctly at a distance. They are fine farmers, and have everything for the stock clean and nice with good out buildings, and they keep fine stock. They took the prize at the Fair for Berkshire hogs, which they import. They are English people, and take a pride in farming well. They made us stay to lunch and loaded us down with fruit from their orchard. They showed us all over the house, which is nicely furnished from top to bottom. They send each day to San Francisco, boxes of "gilt edged" butter, which commands the best price. A windy day. (T.S.R. 60. 2 P.M. 89. S.S. 72.)