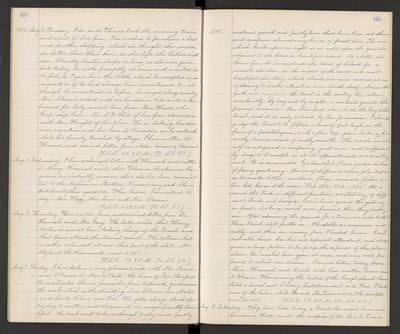 1885. Aug. 4. Tuesday. Ida and Theresa took the morning train and went to San Jose. Ida wished to purchase a hat and do other shopping, which she thought she could do better there than here, so she left the babies with me. Usually Benton sleeps as long as she was gone, but today he woke promptly at noon and wanted to be fed, so I gave him the bottle, which he accepted and unused as if he had always been accustomed to, although he never tired it before. So we go along nicely Mrs. Stewart called with six handsome bibs and a lace bonnet for baby, sent to him from Mrs. Hurd, who keeps shop here. Rev. C.W. Hill of San Jose also called with Mrs. Knights of this place. He is taking his summer vacation, and has been to Pescadero on horseback, while his family traveled by stage. I have written to Howard, and received letters from Ada, Horace & Hannah. (T.S.R. 65. 2 P.M. 99. S.S. 83.)

Aug. 5. Wednesday. I have exchanged letters with Hannah and written to Mary. Hannah writes that Florence Brakeman has grown so violently insane, that she has been committed to the Asylum in Stockton. It seems very sad. She is but twentythree years old. There ladies have called today, Mrs. Flagg, Mrs. Snow and Mrs. Bunn. (T.S.R. 61. 2 P.M. 98. S.S. 81.)

Aug. 6. Thursday. Have written home and received letters from Dr. Hannah and Mrs. Gray. The latter writes that Harry Norton is now at home taking charge of the Ranch and that Jessie attends the Normal school. The extreme hot weather extended all over this part of the state. At Skyland the thermometer went to 96-. (T.S.R. 59. 2 P.M. 90. S.S. 70.)

Aug. 7. Friday. I have taken a very pleasant ride with Mr. Pascoe and Theresa to Menlo Park - the home of Gov. Stanford. It is situated three or four miles from Redwood, just across the creek, which is the dividing line between San Mateo and Santa Clara counties. The gates always stand open by day to visitors, and the grounds are magnificently beautiful. The creek road takes us through pretty woods, partly

1885. natural growth, and partly trees that have been set there and comprise almost every kind of forest trees. The view which breaks upon our eight as we enter upon the grounds adjacent to the house in beautiful indeed. At a little distance from the house stands the tomb of Leland, Jr. a marble structure, in the midst of the rarest and most beautiful shrubbery, which climbs over and around it, as if [?] to make attractive even death itself. Across the path, and very near the tomb is the sentry box, where constantly, by day and by night, a sentinel guards the precious remains. Mrs. Stanford alone holds the key to the tomb, and it is only entered by her permission. I should judge the tomb to be fifteen or twenty feet high, in the form of a parallelogram, with a flat top - plain looking, but costly, because made of costly marble. The residence itself is not grand or imposing, just nice and sufficient by large to be ample in all its appointments as a country seat. It is surrounded by a beautiful flower garden in beds of fancy gardening - flowers of different colors planted so as to make letters, emblems, flags, animals, fishes, &.c. One bed has on it the name "Palo Alto, 1862-1885". All around the Park in different positions, are statuary of different kinds and designs. Grim lions guard the gateway in front, looking much more ferocious than they really are. After admiring the grounds for a time, we rode to the Horse Ranch, still farther on. The stables are numerous and costly, and there are many fine blooded horses. Each valuable horse has his own especial attendant, and it requires a large fortune to keep up the expenses of this place alone. We reached home gain at noon, and were well prepared to relish our dinner. Received letters today from Alice, Hannah and Uncle and have written home and to Horace. This evening the ladies of the Congl. church have held a Social and Literary Entertainment and Fair. I took care of the babies while Ida and Mr. Pascoe went. The receipts were $14. net. (T.S.R. 53. 2 P.M. 82. S.S. 62.)

Aug. 8. Saturday. They have held today a Grant Memorial Service in Germania Hall, under the auspices of the Geo. S. Evans