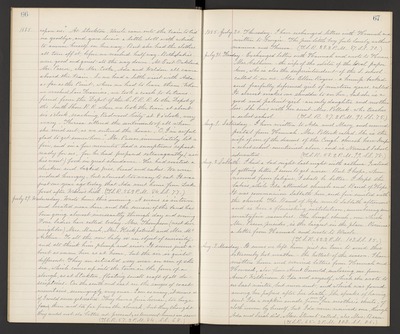 1885. upon us." At Stockton, Uncle came into the train to bid us goodbye, and gave Susie a little doll with which to amuse herself on her way. But she had the clothes all torn off it before we reached half way. Both babies were good and quiet all the way down. At East Oakland Mr. Pascoe, also Mr. Cooke, Ada and Weldon all came aboard the train. So we had a little visit with Ada as far as the Point, when we had to leave them. When we reached San Francisco, we took a coach to be transferred from the Depot of the C.P.R.R. to the Depot of the South Shore R.R. where we took the train at about six o'clock, reaching Redwood City at 8 o'clock, very weary - Theresa uttered the sentiments of all when she cried out, as we entered the house, "O, I'm awful glad to get somewhere." Mr. Pascoe immediately lit a fire, and in a few minutes had a sumptuous repast ready for us, for he had prepared extravagantly (as is his wont) food in great abundance. He had roasted a chicken and baked pies, bread and cakes. We were indeed hungry, but almost too weary to eat. It was just one year ago today that Ada went home from Lockeford after Weldon's birth. (T.S.R. 56. 2 P.M. 84. S.S. 77.)

July 29. Wednesday. Wrote home this morning. A circus is in town and located near here, and the music of the band has been going almost incessantly through day and evening. Four ladies have called today - Mrs. Thompson (next door neighbor) Mrs. Murch, Mrs. Kirkpatrick and Mrs. McArthur. To all the new baby is an object of curiosity, and all think him plump and nice. It seems just about as warm here as at home, but the air is quite different. They are situated very near an arm of the sea, which comes up into the town in the form of a slough, as at Stockton, floating small craft of descriptions. On the south and east are the ranges of coast mountains, seemingly very near. I am so weary, it seems as if I could never get rested. They have a fine house, too large for them and too far from the church, but they thought they could not do better at present, as tenement-houses are scarce. (T.S.R. 57. 2 P.M. 84. S.S. 68.)

July 31. Friday. Exchanged letters with Hannah and wrote to Horace. Mrs. Calhoun - the wife of the editor of the local paper here, who is also the superintendent of the S. school - called to see us. Also Ellen Rogers - a hump-backed and fearfully deformed girl of nineteen years, called. It almost makes one shudder to see her, but she is a good and patient girl - an only daughter and motherless. She lives with her aunt. - Mrs. Pollock - who teaches a select school. (T.S.R. 57. 2 P.M. 91. S.S. 75.)

Aug. 1. Saturday. I have written to Ada and Mary and received postal from Hannah. Mrs. Pollock called. She is the wife of one of the deacons of the Congl. church here keeps a select school - mentioned above - and is Normal School educated. (T.S.R. 58. 2 P.M. 99. S.S. 78.)

Aug. 2. Sabbath. I had a bad night last night with asthma. Instead of getting better, I seem to get worse. But I hope, when recovered from fatigue, I shall be better. I kept the babies, white Ida attended church and Band of Hope. It was communion Sabbath here, and five united with the church The Band of Hope meets Sabbath afternoons and is here a flourishing institution, numbering some seventyfive members. The Congl. church, over which Mr. Pascoe presides, is the largest in the place. Received a letter from Hannah and wrote to Uncle. (T.S.R. 62. 2 P.M. 103. S.S. 85.)

Aug. 3. Monday. It seems we left home just in time to avoid this extremely hot weather - the hottest of the season. I have written home and received letters from Hannah and Howard, also from Aunt Gerould, enclosing one from Aunt Wilkinson to Ida and myself, which the wrote to us last winter, but never sent, and which was found among her papers after her death. She speaks of having sent Ida a napkin made from one of her mother's sheets, of cloth woven by herself, but Ida never received one, though Ada and Sarah did. Mrs. Stewart called, also Mrs. Bean. (T.S.R. 65. 2 P.M. 103. S.S. 86.)