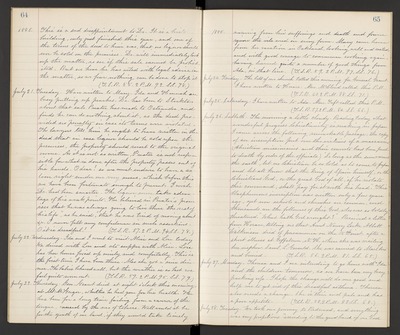 1885. This is a sad disappointment to Dr. It is a brick building, only just finished this year, and one of the terms of the deed to him was, that no liquor should ever be sold on the premises. Dr. will immediately look up the matter, as see if this sale cannot be prohibited. But we hear he has acted with legal advice in the matter, so we fear nothing can be done to stop it. (T.S.R. 55. 2 P.M. 93. S.S. 78.)

July 21. Tuesday. Have written to Mary. Ida and Hannah are busy putting up peaches. Dr. has been to Stockton about that sale Preater has made to Ostrander, and finds he can do nothing about it, as the deed provided no penalty in case its terms were violated. The lawyers tell him he ought to have written in the deed that in case liquor should be sold upon the premises, the property should revert to the original owner. As it is not so written, Preater is not responsible for what is done after the property passes out of his hands. O dear! so we must endure to have a saloon right under our very noses, which before this we have been fortunate enough to prevent. I wish Dr. had been smarter. The liquor men take advantage of his weak points. He believed in Preater's promises that he was always going to live these "the rest of his life," as he said, "that he was tired of moving about" &.c. I never felt any confidence in such assertions. O it is dreadful! (T.S.R. 57. 2 P.M. 94. S.S. 78.)

July 22. Wednesday. Ida and I went to visit Alice and Lou today. We dined with Lou and ate supper with Alice. Lou has her house fixed up nicely and comfortably. This is the first time I have been there. Also she got a nice dinner. The babies behaved well, but the weather is so hot we feel quite worn out. (T.S.R. 59. 2 P.M. 95. S.S. 79.)

July 23. Thursday. Gen. Grant died at eight o'clock this morning, at Mt. McGregor, whither he had gone for his health. He has been for a long time failing from a cancer of the tongue, caused by the use of tobacco. Well would it be for the youth of our land if they would take timely

1885. warning from his sufferings and death and forever ignore the vile weed in every form. Mary came home from her vacation in Oakland, looking well and rested, and with good courage to commence cooking again, having learned quite a number of good things from Ada, in that line. (T.S.R. 59. 2 P.M. 97. S.S. 76.)

July 26. Sabbath. The morning a little cloudy. Reading today what wonderful progress Christianity is making in Japan I came across the following remarkable passage; the copy of an inscription put over the victims of a massacre. (Christian missionaries and their converts had been put to death by order of the officials.) "So long as the sun warms the earth, let no Christian be so bold as to come to Japan and let all know that the king of Spain himself, or the Christians' God, or the great God of all, if he violate this command, shall pay for it with his head." This blasphemous inscription was written only a few years ago, yet now schools and churches are common, and thousands are the followers of this God, who was so boldly threatened." What hath God wrought?" Received a letter from Horace, telling us that Aunt Nancy Locke Abbott Wilkinson died of pneumonia on the 15th inst. after a short illness at Goffstown, N.H. where she was visiting her nephew. Saml. L. Gerould. She was carried to Marlbors' and buried. (T.S.R. 56. 2 P.M. 81. S.S. 65.)

July 27. Monday. Theresa and I are intending to go home with Ida and the children tomorrow, so we have been very busy packing up. I hope the change will do me good and help me to get rid of this dreadful asthma. Theresa also needs a change. She is thin and pale and has a poor appetite. (T.S.R. 58. 2 P.M. 83. S.S. 68.)

July 28. Tuesday. We took our journey to Redwood, and everything was very propitious "according to the good hand of our God