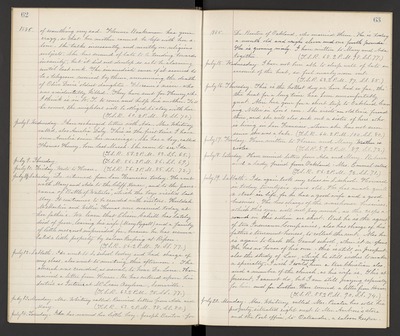 1885. of something very sad. Florence Brakeman has gone crazy, so that her mother cannot be left with her alone. She talks incessantly and mostly on religious subjects. She has seemed of late to be tending towards insanity, but it did not develop so as to be alarming until last week. The immediate cause of it seemed to be a telegram received by them, announcing the death of Olive Davis' oldest daughter - Florence's niece - who was accidentally killed. They have sent for Henry, who I think is in W.T. to come and help his mother. Till he comes, the neighbors will be obliged to stay with her. (T.S.R. 60. 2 P.M. 88. S.S. 70.)

July 11. Saturday. Dr. returned from San Francisco today. He went with Mary and Ada to the Cliff House, and to the panorama of "Battle of Waterloo", which the boys visited last May. It continues to be crowded with visitors. Huldah McMartin and Willie Thomas were married today at her father's. We learn that Elison Cahill has lately died of fever, leaving his wife (Mary Pygall) and a family of little ones, not unprovided for, because he has accumulated a little property by saloon keeping at Ripon. (T.S.R. 56. 2 P.M. 90. S.S. 77.)

July 12. Sabbath. Ida went to S. school today and had charge of my class, also went to meeting this afternoon. The church was crowded, as usual, to hear Dr. Lane. Have received a letter from Horace. He has entered upon his duties as Intern at McLean Asylum, Somerville. (T.S.R. 62. 2 P.M. 95. S.S. 77.)

July 16. Thursday. This is the hottest day we have had so far, tho' the heat for a long time has been uncomfortably great. Alice has gone for a short trip to Oakland leaving Nellie in Lou's care. She visits an old time friend there, and she will also seek out a sister of hers who is living in San Francisco, whom she has not seen since she was a babe. (T.S.R. 64. 2 P.M. 100. S.S. 80.)

July 19. Sabbath. Ida again took my class in S. school. Howard is today twentysix years old. He has made quite a start in life, for he has a good wife and a good business. He has change of the warehouse business, which this year will not pay much, as the crops around in this section are short. But he is the agent of two Insurance Companies, also has charge of his father's tenement houses, to collect the rent. Also he is again to teach the Grant school, when it re-opens. He has no house of his own - this is still in prospect - also the study of Law, which he still wishes to make a specialty. I wish I could record him a true Christian also, and a member of the church, as his wife is. This at present, I cannot do, but I am still praying especially for him and for Luther. Have received a letter from Horace. (T.S.R. 55. 2 P.M. 90. S.S. 74.)