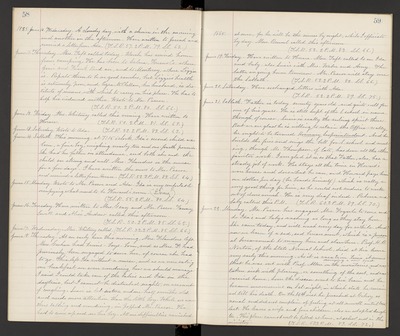 June 11. Thursday. Mrs. Taft called today. Uncle has arrived home from camping. He has been to Selma, Fresno Co. where Josie and Frank Reed are, and to Monterey, where Lizzie is. Reports them to be on good ranches, but Lizzie's health is extremely poor, and Ezra McClellan, her husband, is destitute of means with which to carry on his place. He has to help his widowed mother. Wrote to Mr. Pascoe. (T.S.R. 50. 2 P.M. 80. S.S. 66.)

June 14. Sabbath. This morning, at 7:15 o'clock, Ida's second child was born, a fine boy, weighing nearly ten and one-fourth pounds. She had her father in attendance, and both she and the child are strong and well. Mrs. Flanders is the nurse for a few days. I have written the news to Mr. Pascoe and received a letter from Horace. (T.S.R. 52. 2 P.M. 83. S.S. 64.)

June 18. Thursday. At an early hour this morning, Mrs. Flanders left. Mrs. Geehan had twins - boys - born, and as Mrs. F. had previously been engaged to serve her, of course she had to go. This left Ida without a nurse, and as we were eating our breakfast, we were wondering how we should manage. I said I could take care of the babies and Ida in the daytime, but I cannot be disturbed nights, on account of coughing. Susie is but sixteen and one-half months old and needs more attention than the little boy. While we were thus talking and wondering, in popped Mr. Pascoe. He had to come up and see his boy. All our difficulties vanished

June 21. Sabbath. Father is today seventy years old, and quite well for one of his years. He is still Supt. of the S. school in name though, of course, Susie is really the ruling spirit there. But we are glad he is willing to retain the Office - really he ought to be turned Honorary Superintendent. And he builds the fires and rings the bell for S. school and meeting, though Mr. Thompson, of late, has done all the other janitor work. I am glad it is so that Father, also, has a steady job of work. He stays all the time in Howard's warehouse and does what he can and Howard pays him one dollar per day (he boards himself) which is really a very good thing for him, as he could not endure to work out of doors much. He is very deaf indeed. Rebecca and baby called this P.M. (T.S.R. 60. 2 P.M. 89. S.S. 70.)

June 22. Monday. Mr. Pascoe has engaged Mrs. Fogarle to come and do Ida's and baby's washing as long as they stay here. She came today, and will wash every day for awhile. And now we learn of a sad, sad bereavement, which is a personal bereavement to many here and elsewhere. Prof. H.B. Norton, of the State Normal School, died at his home very early this morning. As it is vacation time, it seems that he was out with Prof. Allen on the mountains, surveying a new road and was taken sick with pleurisy, or something of the sort, and was carried home. Soon the disease went to his brain and he became unconscious on Sat night, in which state he remained till his death. On the 14th inst. he preached at Gilroy as usual and did not complain of feeling at all unwell until Wed. last. He leaves a wife and four children, also an adopted daughter. His place cannot well be filled at home, at school and in the ministry. (T.S.R. 53. 2 P.M. 89. S.S. 72.)