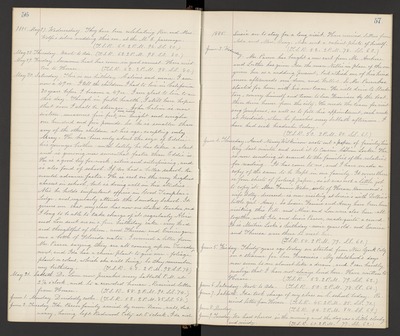 May 30. Saturday. This is our birthday - Calvin's and mine. I am now a '49er. I tell the children I had to live in California 30 years before I became a 49er. I am glad to live to see this day. Though in feeble health, I still have hope that soon I shall be stronger. John Calvin is now sixteen, measures five feet one inch in height and weighs one hundred and five pounds. So he is smaller than any of the other children at his age, excepting only Mary. He has been only about the size of Eddie - his younger brother - until lately he has take a start and is growing now somewhat faster than Eddie is. He is a good boy for work, active and enterprising, and is also fond of school. If we had a better school, he would advance faster. He is not in the very highest classes in school, but is doing well in his studies. Also he holds important offices in Good Templar's Lodge, and regularly attends the Sunday School. It grieves me that my class has now no stated teacher, and I long to be able to take charge of it regularly. Alice and Lou sent us in a fine birthday cake - very kind and thoughtful of them, and Theresa and Eunice gave me a bottle of Florida water. I received a letter from Mr. Pascoe saying they are all coming up on Tuesday next, and Ida has a choice plant to give me - foliage plant or colens, which she will bring. So they remember my birthday. (T.S.R. 63. 2 P.M. 98. S.S. 78.)

June 2. Tuesday. The Pascoe family arrived by noon train, well, but weary, having left Redwood City at 5 o'clock. Ida and

June 3. Wednesday. Mr. Pascoe has bought a new cart from Mr. Ambrose and Luther has given Ida the mare Nellie in place of the one given her as a wedding present, but which one of his hired men afterwards over-drove and killed. So Mr. Pascoe has started for home with his new team. He will drive to Stockton, convey himself and team to San Francisco by the boat, then drive home from the city. He needs the team for visiting purposes, as well as to fill his appointment, each week at Woodside, where he preaches every Sabbath afternoon. I have had sick headache today. (T.S.R. 50. 2 P.M. 80. S.S. 61.)

June 4. Thursday. Aunt Nancy Wilkinson wrote out a paper of family history last winter and sent it to cousin Calvin Locke. He is now sending it around to the families of the relative's for reading. It has come to us, and I have made a copy of the same to be kept in our family. It covers three or four sheets of foolscap paper, so it was not a little job to copy it. Mrs. Fannie Weber, sister of Horace Hammond's wife Dolly - deceased - is now visiting at Susie's with Dollie's little girl - Amy. So Susie, Fannie and Amy have been here visiting this P.M. and Alice and Lou were also here - all together, with Ida and Susie Pascoe, made quite a crowd. It is Mertice Locke's birthday - nine years old - and Eunice and Theresa were there to visit her. (T.S.R. 50. 2 P.M. 79. S.S. 60.)

June 5. Friday. Thirty years ago today we started from New York City in a steamer for San Francisco. My childhood's days now seem to me almost like a dream, and I can hardly realize that I have not always live here. Have written to Horace. (T.S.R. 52. 2 P.M. 79. S.S. 62.)