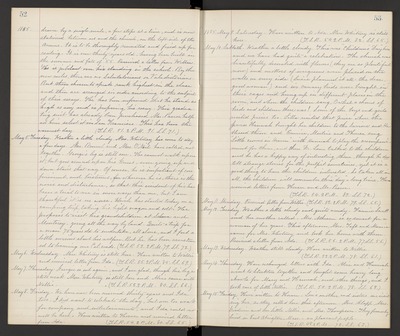 1885. drawn by a single mark, a few steps at a time, and is now stationed between us and the church, on the left side of the avenue. It is to be thoroughly renovated and fixed up for renting. It is now thirty years old, having been built in the summer and fall of 55. Received a letter from Willie. He is jubilant over his standing in the school. By the new rules, there are no Salutatorians or Valedictorians. But those chosen to speak rank highest in the class and then are arranged in order according to the subjects of their essays. He has been informed that he stand as high as any and is preparing his essay. His graduating suit has already been purchased. Mr. Pascoe helped him select it in San Francisco. This has been the warmest day. (T.S.R. 51. 2 P.M. 91. S.S. 71.)

May 5. Tuesday. Weather a little cloudy. Mrs. Whitney has come to stay a few days. Mrs. Bruml and Mrs. O'Neil have called, not together. George's leg is still sore. He cannot walk upon it, but goes around upon his knees, even going up and down stairs that way. Of course, he is impatient of confinement, and boisterous, for wherever he is, there is the noise and disturbance, so that this accident of his has been a trial to me in more ways than one, but I am thankful it is no worse. Uncle has started today on a camping trip, taking his light wagon and colt. He proposes to visit his grandchildren at Selma and Monterey, going all the way by land. Quite a trip for a man 75 years old to undertake, all alone, and I feel a little anxious about his welfare. But he has been accustomed to learning over Cal. roads. (T.S.R. 53. 2 P.M. 79. S.S. 72.)

May 8. Friday. We have now been married thirty years and Ida two. I did want to celebrate the day, but am too weak for company and entertainments, and Ida could not well be here. Have written to Horace and received letter from Ada. (T.S.R. 54. 2 P.M. 80. S.S. 65.)

May 10. Sabbath. Weather a little cloudy. This was "Children's Day" here and we have had quite a celebration. The church was beautifully decorated with flowers (they are so plentiful now) and mottoes of evergreens were placed on the walls on every side (Susie planned it all - the dear good woman) and six canary birds were brought in their cages and hung up in different places in the room, and when the children sang, O what a chorus of birds and children there was! Some of the boys and girls recited pieces too. Lilla recited that piece where the Jewess Hannah brought her children to the Saviour and He blessed them and Eunice, Mertice and Theresa sang "Little crowns in Heaven" with Hannah to play the accompaniment for them, and then Dr. Lane talked to the children and he has a happy way of interesting them, though he does tell strange stories for the pulpit sometimes, yet it is a good thing to have the children interested. So taken all in all, the children will remember this "day" a long time. Have received letters from Horace and Mr. Pascoe. (T.S.R. 54. 2 P.M. 83. S.S. 72.)

May 14. Thursday. Have exchanged letters with Ida. Alice and Hannah went to Stockton together and bought some heavy "long" shawls for Mary and Hannah, and other things, and I took care of little Nellie. (T.S.R. 50. 2 P.M. 78. S.S. 63.)

May 15. Friday. Have written to Horace. Lou's mother and sisters are visiting her, so they called here this afternoon. Mrs. Clapp, Mrs. Goodwin and her little Nellie and Mrs. Thompson. They formerly lived in East Abington, Mass. - are pleasant people. (T.S.R. 48. 2 P.M. 78. S.S. 63.)