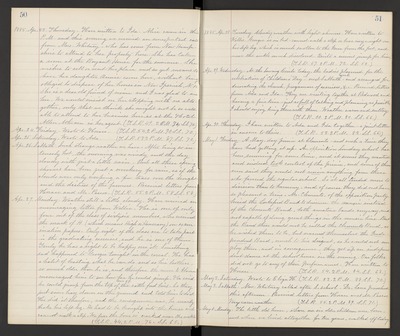 1885. Apr. 23. Thursday. Have written to Ida. Alice came in this P.M. and this evening we received an unexpected call from Mrs. Whitney, who has come from New Hampshire to attend to her property here: She has taken a room at the Bryant House for the summer. She wishes to sell or sent her place and so get means to have her daughter Annie come here, without being obliged to dispose of her house in New Ipswich, N.H. She is a dear old friend of mine and I was glad to see her. We would insist on her stopping with us altogether, only that we think she might not be so well able to attend to her business here, as at the Hotel. Allen Athearn is her agent. (T.S.R. 49. 2 P.M. 74. S.S. 70.)

Apr. 26. Sabbath. Such strange weather we have. After being so intensely hot, the morning was windy and the day cloudy with just a little rain. But all these spring showers have been just a mockery for rain, as if the clouds were only weeping a few tears over the drought and the distress of the farmers. Received letters from Horace and Mr. Pascoe. (T.S.R. 55. 2 P.M. 58. S.S. 58.)

Apr. 27. Monday. Weather still a little cloudy. Have received an encouraging letter from Willie. He is one of only four out of the class of sixtysix members, who received the mark of H (which means High or Honorary) on examination papers. Only eight of the class are to take part in the graduating exercises, and he is one of them. Truly he has a right to be happy over it. Something sad happened to Georgie tonight in the corral. He has a habit of boasting what he can do and so his brothers, so much older than he is, and therefore the more to blame encouraged him to see how far he could jump. He said he could jump from the top of one of the cattle feed bins. So they put some hay down on the ground and told him to do it. He did it therefore, and the consequence was, he nearly broke his left leg. He had to be brought into the house and cannot walk a step. We fear the bone is cracked near the ankle. (T.S.R. 44. 2 P.M. 76. S.S. 65.)

Apr. 29. Wednesday. At the Sewing Circle today, the ladies planned for the celebration of "Children's Day" next Sabbath week - and arranged for decorating the church, programme of exercises, &.C. Received letters from Ada and Ida. They are visiting together at Redwood and having a fine time - just as full of talking and planning as possible. I should enjoy being there with them. Weather warm and sultry. (T.S.R. 50. 2 P.M. 80. S.S. 66.)

May 1. Friday. A May-day picnic at Clements - and such a time they have had getting it up. An opposition Sunday school has been running for some time, and it seems they wanted and indeed took control of the picnic, and some of them even said they would not receive anything from those who favored the regular school. So it all tended more to division than to harmony, and of course they did not have so pleasant a time. Mr. Clements, of the opposition party, hired the Lockeford Band to discourse the music instead of the Clements Band, both amateur bands anyway, and not capable of doing great things in the music line. But the Band there would not be called the Clements Band, as he wished them to be, but named themselves the Independent Band, much to Lou's disgust, so he would not employ them, and in consequence, they got up an independent dance at the school house in the evening. Our folks did not go to any of their performances. Have written to Horace. (T.S.R. 54. 2 P.M. 84. S.S. 68.)

May 4. Monday. The little old house, where our six older children were born, and where we lived altogether for ten years, walked off today