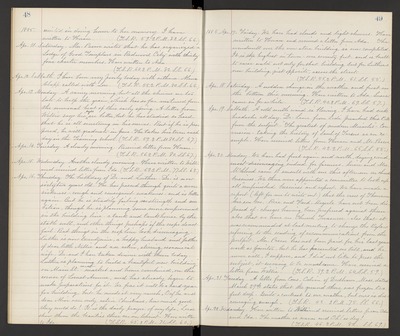 Apr. 13. Monday. A rainy morning, but all the showers are too late to help the grain, which has so far matured from the unusual heat of this early spring. A letter from Willie says his eyes are better, but he has studied so hard that he is all unstrong in his nerves. But if he is prospered, he will graduate in June. He takes his turn each day in the Training School (T.S.R. 59. 2 P.M. 80 S.S. 67.)

Apr. 16. Thursday. The birthday of Dr. and Luther. Dr. is now sixtytwo years old. He has passed through quite a severe sickness - cough and consequent weakness - and is better again. But he is steadily failing in strength and ambition, though he is planning some more improvements in the building line - a tank and tank house by the stable well, and other strings perhaps if the crops do not fail. But strings in the crop line look discouraging. Luther is now twentynine, a happy husband and father of dear little Nellie and an active, stirring, economical wife. Dr. and I have taken dinner with them today. Luther is planning to build a beautiful new building on Main St. - meat market and home combined, on the corner of Locust Avenue, and has already begun to make preparations for it. We fear it will be a hard year for building, but he needs it very much. O if he and dear Alice were only active Christians, how much good they could do! It is the daily prayer of my life, "Lord show them the beauties there are in Christ". Have written to Ida. (T.S.R. 45. 2 P.M. 71 S.S. 60.)

1885. Apr. 17. Friday. We have had clouds and light showers. Have written to Horace and received a letter from Ada. The windmill over the new store building is now completed. It is the highest in town - over seventy feet and is built to raise water not only for that building but for Luthers new building, just opposite, across the street. (T.S.R. 55. 2 P.M. 61. S.S. 55.)

Apr. 19. Sabbath. A cold north wind is blowing. I have had sick headache all day. Dr. Lane from Lodi preached this P.M. from the subject - "The greatest of modern Miracles" - Conversion - taking the history of Saul of Tarsus as an example. Have received letters from Horace and Mr. Pascoe. (T.S.R. 42. 2 P.M. 65. S.S. 55.)

Apr. 20. Monday. We have had frost again and north, drying wind, most discouraging indeed for farmers. Susie and Mrs. McCloud came to consult with me this afternoon on church business. We three were appointed a committee to look up all "unfinished business" and report. We have made a report (left for me to write out) that the cases of Thomson his son Geo. - Rice and Fred. Megerle have not been disposed of - charges having been preferred against them - also that we have no Church Treasurer - also that it was recommended at last meeting to change the Bylaw referring to the reading of excommunications from the pulpit. Mr. Pascoe has not been paid for his last years work as Janitor, but he has presented no bill, and he never will, I suppose, and I did not like to press the subject, it seeming to be unwelcome. Have received a letter from Willie. (T.S.R. 39. 2 P.M. 64. S.S. 59.)