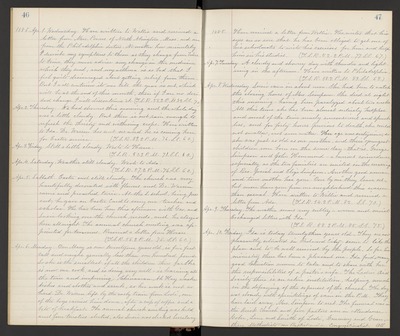 1885. Apr. 1. Wednesday. Have written to Willie and received a letter from Mrs. Powers of North Abington, Mass. and one from the Philadelphia doctors. No matter how minutely I describe my symptoms to them as they change from time to time, they never advise any change in the medicine which they send, and my asthma is so bad that I feel quite discouraged about getting relief from them. But I will continue its use till the year is out, which will be at the end of this month, then if I see no decided change, I will discontinue it. (T.S.R. 55. 2 P.M. 82. S.S. 70.)

Apr. 2. Thursday. We had showers this morning and the whole day was a little cloudy. But there is not rain enough to refresh the thirsty and withering crops. Have written to Ida. Dr. Warren has sent us word he is coming here for Easter service. (T.S.R. 59. 2 P.M. 76. S.S. 60.)

Apr. 5. Sabbath. Easter and still cloudy. The church was very beautifully decorated with flowers and Dr. Warren came and preached twice. At the S. school, being present, he gave an Easter Card to every one - teacher and scholar. He has been here this afternoon with Geo. and Susie looking over the church records, and he stayed here all night. The annual church meeting was appointed for tomorrow. Received a letter from Horace. (T.S.R. 56. 2 P.M. 76. S.S. 60.)

Apr. 6. Monday. Our Mary is now twentyone years old, is five feet tall and weighs generally less than one hundred pounds. So she is the smallest of all the children thus far. She is now our cook, and is doing very well - is learning all the time and improving. Chinaman Ah Kay washes dishes and clothes and scrubs, so her work is not so hard. Dr. Warren left by the early train from Lodi, one of the boys carried him down, after a cup of coffee and a bite of breakfast. The annual church meeting was held and four trustees elected, also Susie was elected Secretary.

Apr. 8. Wednesday. Susie came in about noon. She had been to watch the closing hours of Mrs. Simpson. She died at eight this morning - having been paralyzed about two weeks. All this time she has been almost entirely helpless and most of the time nearly unconscious and speechless, and for forty hours previous to death, she could not swallow, not even water. Her age was sixtynine, so she was just as old as our mother, and their youngest children were born on the same day - that is, George Simpson and John Hammond - a curious coincidence, especially as the two families are united in the marriage of Bro. Josiah and Eliza Simpson. Another good woman, and true another has gone. "One by one" they leave us, but more have gone from our neighborhood this season than usual. Have written to Willie and received a letter from Ada. (T.S.R. 54. 2 P.M. 82. S.S. 70.)

Apr. 10. Friday. Ida is today twentythree years old. They are now pleasantly situated in Redwood City - seem to like the place and to be well received by the people. So far his ministry there has been a pleasant one. Ida finds many good Christian women to take and to share with her the responsibilities of a pastor's wife. The Ladies' Aid Society there is an active institution, helping much in the defraying of the expenses of the church. The day was cloudy with sprinklings of rain in the P.M. They have laid away Mrs. Simpson to rest. The funeral was in the Brick Church and five pastors were in attendance - Gober, Lane and Smith of Lodi, Guernsey and Green, - three Methodists - one Baptist and one Congregationalist. All