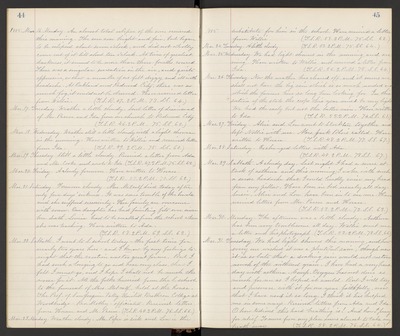 1885. Mar. 16. Monday. An almost total eclipse of the sun occurred this morning. The sun rose bright and fair, but began to be eclipsed about seven o'clock, and did not wholly come out of it till about ten o'clock. At time of greatest darkness, it seemed to be more than three-fourths covered. There was a singular sensation in the air, and quite oppressive, so that a number of us felt dizzy and ill with headache. At Oakland and Redwood City, there was so much fog, it could not be observed. Have received letter from Willie. (T.S.R. 47. 2 P.M. 73. S.S. 64.)

Mar. 21. Saturday. Forenoon cloudy - Mrs. Metcalf died today after only four days' sickness. It was some trouble of the bowels and she suffered excessively. Her family are overcome with sorrow. One daughter has had fainting fits ever since her death. Louisa had to be recalled from the school where she was teaching. Have written to Ada. (T.S.R. 53. 2 P.M. 69. S.S. 62.)

Mar. 22. Sabbath. I went to S. school today - the first time for nearly two years here - and I know by my feelings tonight that the exertion was too great for me. But I had such a longing to go and hear my class, that I felt I must go, and I hope I shall not be much the worse for it. All the folks hurried from the S. school to the funeral of Mrs. Metcalf, held at the house. The Prof. of San Joaquin Valley United Brethren College at Woodbridge - Rev. Mobley - officiated. Received letters from Horace and Mr. Pascoe. (T.S.R. 48. 2 P.M. 76. S.S. 66.)

Mar. 23. Monday. Weather cloudy. Mr. Piper is sick and Lou is the

Mar. 26. Thursday. Now the weather has cleared off, and it seems we shall not have the big rain which is so much needed and which the farmers have so long been looking for In this section of the state the crops this year must be very light. We had the early but not the latter rain. Have written to Ida. (T.S.R. 55. 2 P.M. 74. S.S. 61.)

Mar. 29. Sabbath. A cloudy day. Last night I had a severe attack of asthma and this morning I woke with such a severe headache that I could hardly raise my head from my pillow. Have been in bed nearly all day. Susie, Alice and Lou have been in to see me. Have received letters from Mr. Pascoe and Horace. (T.S.R. 53. 2 P.M. 72. S.S. 63.)

Mar. 31. Tuesday. We had light showers this morning, and how every one wished it was a plentiful rain, though now it is so late that a soaking rain would not restore much of the withered grain. I have had a very hard day with asthma. Comp. Oxygen has not done as much for me as I hoped it would. But I will try and persevere with it for one year faithfully, now that I have used it so long. I think it has helped me in some ways. Received letters from Ada and Ida. O how tedious this hard breathing is! And how I pray for relief. To move from my place seems almost to take my breath away. (T.S.R. 58. 2 P.M. 76. S.S. 64.)