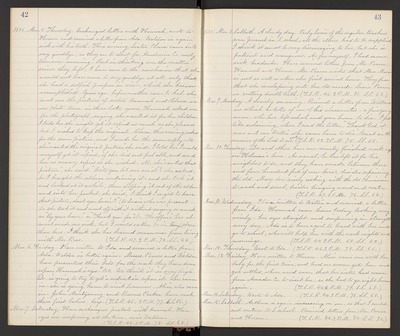 1885. Mar. 5. Thursday. Exchanged letters with Hannah, wrote to Horace and received a letter from Ada. Weldon is again sick with his teeth. This evening, Sister Clara came into say goodbye, as they are to start for Mendocins Co. early tomorrow morning. But in thinking over the matter since they left, I have come to the conclusion that she would not have come to say goodbye at all, only that she had a selfish purpose in view, which she has now accomplished. Years ago, before mother came to Cal. she sent me the pictures of sisters Hannah and Clara, on one plate. Once, in these later years, Hannah asked me for the photograph, saying she wanted it for her children. I told her she might get it copied as much as she pleased but I wished to keep the original. Clara, this evening, asked for the same picture, and I made her the same reply. No, she "wanted the original picture," she said. I told her I would myself get it copied, if she did not feel able, and send her as many copies as she wished. No, she "wanted that picture," she said. "Will you let me see it?" she asked. So I brought the album containing it, and she took it and looked at it awhile, then slipping it out of the album and into her pocket, she said, "I think I ought to have that picture, dont you, Susie?" (to Susie who was present. So she took it and went off with it without saying so much as "By your leave" or "Thank you" for it. The affair has almost made me sick, but I would rather be in my place than hers. I think she has learned meanness from living with Mr. Ross. (T.S.R. 47. 2 P.M. 72. S.S. 66.)

Mar. 6. Friday. Have written to Ida and received a letter from Ada. Weldon is better again. Msses. Powers and Wilder have presented their bill for the work they have done upon Hannah's eyes - $150. We think it is very high. Dr. is going to try to get a reduction upon it. Lou came in - she is going home to visit tomorrow. Alice also came in. John Montgomery and Barnes Parker have each their first babies - boys. (T.S.R. 46. 2 P.M. 77. S.S. 66.)

1885. Mar. 8. Sabbath. A cloudy day. Only Susie of the regular teachers were present in S. school, all the others had to be supplied. I think it must be very discouraging to her, but she is patient and courageous. As for myself, I had severe sick headache. Have received letters from Mr. Pascoe, Hannah and Horace. Mr. Pascoe writes that Mrs. [?] is not so well as when she first arrived home. They fear that she is relapsing into her old moods. Susie Pascoe is cutting double teeth. (T.S.R. 46. 2 P.M. 81. S.S. 68.)

Mar. 9. Monday. A cloudy morning. Received a letter from Willard in which he tells of one of his classmates - a fine young man who has left school and gone home to die. I felt like exclaiming, when I read the letter, "Thank God it was not our Willis who came home to die." Great are the mercies of the Lord to us. Ward - (T.S.R. 52. 2 P.M. 75. S.S. 65.)

Mar. 10. Tuesday. Dr. and others have now nearly finished work up on Holman's levee. As usual, he has left it for his neighbors to do, and they have made between three and four hundred feet of new levee, besides repairing the old. Mary does nicely cooking, with the old Chinaman to wash and scrub, besides bringing wood and water. (T.S.R. 47. 2 P.M. 76. S.S. 64.)

Mar. 11. Wednesday. Have written to Willie and received a letter from Ida. Hannah came home today looking very nicely her eyes straight and improving in strength every day. Ada is to have a girl to board with her and go to school, who will help her with the work nights and mornings. (T.S.R. 44. 2 P.M. 68. S.S. 62.)