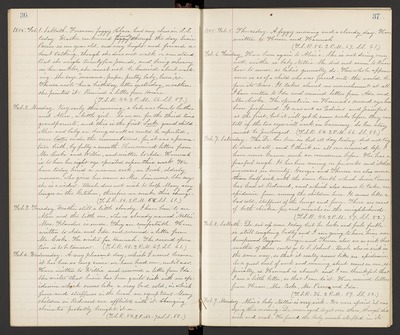 1885. Feb. 1. Sabbath. Forenoon foggy. Clara had my class in S.S. today. Weather continued cloudy through the day. Susie Pascoe is one year old, and very bright and forward about talking, though she does not walk or even stand. But she weighs twentyfive pounds, and being so heavy on her ankles, she must not be hurried about walking. She says, "mamma, papa, pretty baby, burn," &.c. Theresa wrote her a birthday letter yesterday, or rather she printed it. Received a letter from Horace. (T.S.R. 44. 2 P.M. 66. S.S. 59.)

Feb. 2. Monday. Very early this morning, a babe was born to Luther and Alice, a little girl. So we are for the third time grandparents, and this is the first Locke grand child. Alice and baby are doing as well as could be expected, even better under the circumstances, for it was a premature birth, by fully a month. Have received letters from Mr. Cooke and Willie, and written to Ada. Hannah is to have her right eye operated upon this week. We have today hired a woman cook, an Irish, elderly woman, who gives her name as Ms. Simmons. She says she is a widow. Uncle does not wish to help Mary any longer in the kitchen, therefore we make this change. (T.S.R. 54. 2 P.M. 68. S.S. 61.)

Feb. 3. Tuesday. Weather still a little cloudy. I have been to see Alice and the little one, who is already named "Nellie". Mrs. Flanders is nurse. They are comfortable. Have written to Ada and Ida and received a letter from Mr. Cooke. He writes for Hannah. The second operation is to be tomorrow. (T.S.R. 48. 2 P.M. 69. S.S. 61.)

Feb. 4. Wednesday. A very pleasant day, which I record because it has been so long since we have had one, until now. Have written to Willie and received a letter from Ida. She writes that Susie has been quite sick with an epidemic which seems like a very bad cold, in which fever and stuffness in the head are symptoms. Many children in Redwood are afflicted with it. Changing climates probably brought it on. (T.S.R. 54. 2 P.M. 70. S.S. 62.)

Feb. 6. Friday. Have been again to Alice's. She is not doing very well, neither is baby Nellie. She did not seem to know how to nurse, as babies generally do. Her whole appearance is as of a child who was forced into the world before its time. It takes almost no nourishment at all. I have written to Ida and received letters from Ada and Mr. Cooke. The operation on Hannah's second eye has been performed. It was not as tedious and painful as the first, but it will yet be some weeks before they can tell if the two eyes will work in harmony. So her stay must be prolonged. (T.S.R. 54. 2 P.M. 66. S.S. 58.)

Feb. 7. Saturday. The Dr. has been in bed all day today - did not try to dress at all - and I think in all our married life I have never known such an occurrence before. He has a fearful cough. It has been coming on for weeks and it still increase in severity. Georgie and Theresa are also more than half sick, with the same trouble which Susie Pascoe has had at Redwood, and which also seems to take an epidemic form among the children here. It seems like a bad cold, stuffness of the lungs and fever. There are cases of both chicken pox and measles in the neighborhood. (T.S.R. 40. 2 P.M. 57. S.S. 52.)

Feb. 8. Sabbath. Dr. sat up some today but he looks and feels feeble - is still coughing badly and I am going to have him use Compound Oxygen Georgie and Theresa also are so sick that neither of them could go to S. school. Uncle also is sick in the same way, so that it really seems like an epidemic. So a great deal of work and running about comes on me, especially as Hannah is absent and I am thankful that I am a little better, so that I can do it. Have received letters from Horace, Ms. Cooke, Mr. Pascoe and Ida. (T.S.R. 36. 2 P.M. 59. S.S. 52.)

Feb. 9. Monday. Alice's baby Nellie is very sick. We were afraid it was dying this morning. Dr. managed to get over there, though still sick and weak. He found the baby much stuffed in its