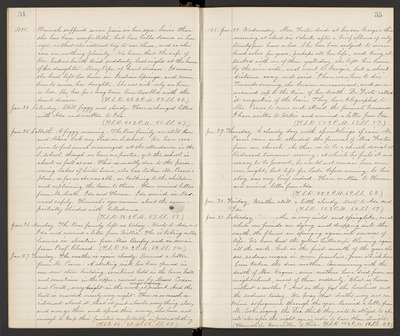 1885. Hannah suffered severe pain in her eyes. Since then she has been comfortable, but has bella-donna in her eyes, so that she will not try to use them, and so she can see nothing plainly. We learn that the wife of Rev. Esdras Smith died suddenly last night at the house of her daughter, Mary Pope, of heart disease. It seems she had left her home in Indian Springs, and come here to nurse her daughter. She was sick only an hour or less. She has for a long time been troubled with the heart disease. (T.S.R. 42. 2 P.M. 53. S.S. 48.)

Jan. 25. Sabbath. A foggy morning. The Ross family are still here and Clara took my class in S. school. We have occasion to feel much encouraged at the attendance in the S. school, though we have no pastor, yet the school is about as full as ever. This is mostly due to the persevering labors of Sister Susie, who has taken Mr. Pascoe's place, as far as she was able, in talking to the children and explaining the lesson to them. Have received letters from Mr. Cooke, Ida and Horace. Ida arrived in Redwood safely. Hannah's eyes remain about the same - partially blinded with belladonna. (T.S.R. 32. 2 P.M. 57. S.S. 53.)

Jan. 27. Tuesday. The weather is again cloudy. Received a letter from Mr. Pascoe. A skating rink has been opened in our new store building, sometimes held in the lower hall and sometimes in the upper, carried on by Mssrs. Corson and Powell, every bright in the week except Sunday at present. And the hall is crowded nearly every night. There is so much excitement about it, that it just absorbs every thing else, and men go there and spend their money, who have not enough to keep their families comfortably in food and clothing. (T.S.R. 44. 2 P.M. 58. S.S. 55.)

1885. Jan. 28. Wednesday. Mrs. Foster died at her son George's this morning, at about six o'clock, after a brief illness of only twentyfour hours or less. She has been subject to severe headaches for years, perhaps all her life, and being attacked with one of them yesterday, she left her home by the river-side, and went to George's, but a short distance away, and said "I have come here to die". Towards evening, she became unconscious, and so remained up to the time of her death. Dr. Foote called it congestion of the brain. They have telegraphed to Mr. Pascoe to come and attend the funeral tomorrow. I have written to Willie and received a letter from Ida. (T.S.R. 50. 2 P.M. 63. S.S. 57.)

Jan. 29. Thursday. A cloudy day with sprinklings of rain. Mr. Pascoe came and attended the funeral of Mrs. Foster from our church. As there is to be a church social at Redwood tomorrow evening, at which he feels it necessary to be present, he would not remain here even over night, but left for Lodi before evening. So his stay was very brief indeed. Have written to Horace and received letter from Ada. (T.S.R. 48. 2 P.M. 69 .S.S. 63.)

Jan. 31. Saturday. The weather is very mild and springlike, and while our friends are dying and dropping into the earth, the flowers are springing again into newness of life. We have had the yellow buttercups blooming again all the week, but as the first month of the year closes, sadness reigns in severe families, from which have been taken the dear mother. Commencing with the death of Mrs. Wagner, seven mothers have died from our neighborhood, most of them suddenly. "What is home without a mother?" And so they feel the loneliness and the sadness today. We pray that deaths may not continue so frequent through the year. Received a letter from Mr. Cooke saying the Drs. think they will be obliged to operate also upon the right eye, in order to have them straight. (Hannah's). Have written to Phila. (T.S.R. 48. 2 P.M. 68. S.S. 59.)