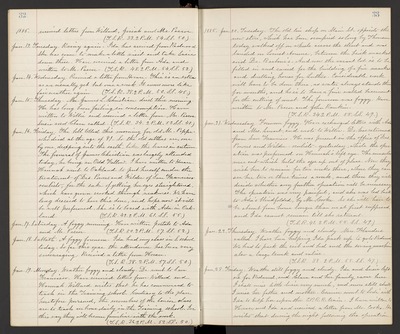 Jan. 16. Friday. The bell tolled this morning for old Mr. Poppe - who died at the age of 81. So the old settlers are, one by one, dropping into the earth, like the leaves in autumn. The funeral of James Christian was largely attended today, he being an Odd Fellow. I have written to Horace. Hannah went to Oakland to put herself under the treatment of Drs. Powers and Wilder of San Francisco oculists, for the sake of getting her eyes straightened, which have grown crooked through weakness. We have long desired to have this done, and hope now it will be well performed. She is to board with Ada in Oakland. (T.S.R. 42. 2 P.M. 61. S.S. 55.)

Jan. 19. Monday. Weather foggy and cloudy. Dr. went to San Francisco. Have received letters from Willard and Hannah. Willard writes that he has commenced to teach in the Training school. Contrary to the plan heretofore pursued, the members of the Senior class are to teach an hour daily in the Training school. In this way they will become familiar with the work. (T.S.R. 36. 2 P.M. 52. S.S. 50.)

1885. Jan. 20. Tuesday. The old tin shop on Main St. opposite the new store, which has been occupied so long by Thomson today walked off on wheels across the street and was landed on Locust Avenue, between the brick market and Dr. Barbour's. And now the vacant lot is to be filled in and raised for the building of a fine market and dwelling house for Luther. Considerable work will have to be done there, as water always stands there for months, and he is to have a fine walled basement for the cutting of meat. The forenoon was foggy. Have written to Mr. Pascoe and John Rankin. (T.S.R. 34. 2 P.M. 55. S.S. 49.)

Jan. 21. Wednesday. Forenoon foggy. Have exchanged letters with Ada and Mrs. Smart, and wrote to Willie. Dr. has returned from San Francisco. He was present in the office of Drs. Powers and Wilder - oculists - yesterday, while the operation was performed on Hannah's left eye. The muscles were cut which held the eye up out of place. Now they wish her to remain for two weeks there, where they can see her two or three times a week, and then they will decide whether any further operation will be necessary. The operation was very painful, and she was led back to Ada's blindfolded, by Mr. Cooke. So she will have to be absent from home longer than we at first supposed, and Ida cannot remain till she returns. (T.S.R. 41. 2 P.M. 55. S.S. 49.)

Jan. 23. Friday. Weather still foggy and cloudy. Ida and Susie left us for Redwood, and Clara and her family came here. I shall miss little Susie very much, and more still shall I miss her father and mother. Eunice went to Lodi with Ida to help her upon the C.P.R.R. train. I have written to Horace and Ida and received a letter from Mr. Cooke. He writes that during the night following the operation.