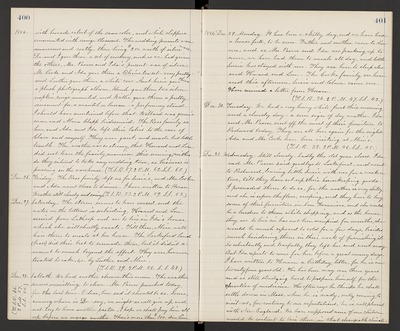 1884. with brocade velvet of the same color, and white slippers ornamented with orange blossoms. The wedding presents were numerous and costly, there being $200. worth of silverware. Dr. and I gave them a set of crockery, such as we had given the others, Mr. Pascoe and Ida's present was of silver, Mr. Cooke and Ada gave them a Rhine tea set-very pretty and Luther gave them a white cow. Aunt Susie gave them a plush photograph album, Uncle gave them two silver napkin rings mounted, and Willie gave them a pretty ornament for a mantel or bureau - a perfumery stand. I should have mentioned before that Willard was groom's man and Alma Clapp bridesmaid. The Ross family is here, and Ada and Ida left their babies to the care of Clara and myself. They were quiet, and made but little trouble. The weather was so stormy, that Howard and Lou did not leave the family mansion this evening, neither do they intend to take any wedding tour, as business is pressing in the warehouse. (T.S.R. 57. 2 P.M. 62. S.S. 60.)

Dec. 27. Saturday. The storm seems to have ceased, and the water on the bottoms is subsiding. Howard and Lou arrived from Lathrop and are to live in Ida's house, which she will shortly vacate. Till then, Alice will have them to meals at her house. The Lockeford band (brass) did their best to serenade them, but it didn't amount to much beyond the effort. They were, however, treated to cake, &.c. by Luther and Alice. (T.S.R. 39. 2 P.M. 56. S.S. 48.)

1884. Dec. 29. Monday. It has been a chilly day, and we have had a house full, to be sure. Father and mother came to dinner, and as Mr. Pascoe and Ida are packing up to move, we have had them to meals all day, and little Susie has stayed with me. They are here to sleep also and Howard and Lou. The Cooke family are here and this afternoon, Susie and Clara came over. Have received a letter from Horace. (T.S.R. 34. 2 P.M. 47. S.S. 42.)

Dec. 31. Wednesday. Still cloudy. Sadly the old year closes. Ida and Mr. Pascoe said goodbye to Lockeford, and went to Redwood, leaving little Susie with me for a week or two, till they have set up their housekeeping goods. I persuaded them to do so, for the weather is very chilly and she is upon the floor, creeping, and they have to buy some of their furniture in San Francisco, and she would be a burden to them while shopping, and as the house they are to live in has not been occupied for months, she would be much exposed to cold for a few days, besides much hindering them in their work of furnishing it. So reluctantly and tearfully they left her and went away. But Ida expects to come for her before a great many days. I have written to Horace a birthday letter, for he is now twentyfour years old. He has been away over three years and is still studying hard to prepare himself for the practise of medicine. He often says he thinks he shall settle down in Mass. when he is ready, only coming to visit us, for contrary to our expectations, he is well pleased with New England. We have supposed none of our children would be content to live there, in that changeable climate.