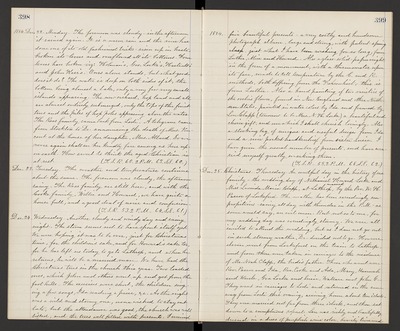 1884. Dec. 22. Monday. The forenoon was cloudy - in the afternoon it rained again. It is a warm rain and the river has done one of its old fashioned tricks-risen up in haste, broken its levers and overflowed all its bottoms. Four levers have broken-viz! Holman's, Geo. Locke's, Hartwell's and John Kerr's. Ours alone stands, but what good does it do? The water is deep on both sides of it, the bottom being almost a lake, only a very few very small islands appearing. The new orchard, hop land and all are almost entirely submerged, only the tops of the finch trees and the piles of hop poles appearing above the water. The Ross family came back from Lodi. A telegram came from Stockton to Dr. announcing the death of Mrs. Vincent at the house of her daughter, Mrs. Allard. So we never again shall see her kindly face among us here upon earth. How sweet to think the aged Christian is at rest. (T.S.R. 60. 2 P.M. 63. S.S. 60.)

Dec. 23. Tuesday. The weather and temperature continue about the same. The forenoon was cloudy, the afternoon rainy. The Ross family are still here, and with the Cooke family, Willie and Howard, we have quite a house full, and a good deal of noise and confusion. (T.S.R. 53. 2 P.M. 64. S.S. 61.)

Dec. 24. Wednesday. Another cloudy and windy day and rainy night. The storm seems not to have spent itself yet. We were hoping it was to be over, just for Christmas time, for the children's sake, and for Howard's sake too, for he has left us today to go to Lathrop, and when he returns, he will be a married man. We have had the Christmas trees in the church this year. Two loaded ones, which John and others went up and got from the foot hills. The exercises were short, the children singing a few songs, Ida reading a piece, &.c. As the night was a wild and stormy one, none wished to stay out late, but the attendance was good, the church was well billed, and the trees well filled with presents. I received

1884. five beautiful presents - a very costly and handsome photograph album, large and strong, with patent spring clasp, just what I have been wishing for so long, from Luther, Alice and Howard. Also a glass-solid-paper weight, in the form of a monument, with a thermometer upon its face, made to tell temperature by the C. and R. methods, both differing from the Fahrenheit, this is from Luther. Also a hand painting of two varieties of the orchis flower, found in New England and other Northern States, painted in water colors by Ida and framed by Lou Clapp (tomorrow to be Mrs. N.H. Locke) a beautiful and choice gift, and one which I shall cherish lovingly. Also a stocking bag of unique and useful design from Ida and a nice pocket handkerchief from sister Susie. I have given the usual number of presents, and have wearied myself greatly marking them. (T.S.R. 55. 2 P.M. 65. S.S. 62.)

Dec. 25. Christmas. Thursday. An eventful day in the history of our family - the wedding day of Nathaniel Howard Locke and Miss Lucinda Maria Clapp, at Lathrop, married by the Rev. W. H. Pascoe of Lockeford. The weather has been exceedingly unpropitious - rainy all day with thunder in the P.M. as some would say, an evil omen. But not so to me, for my wedding day was exceedingly stormy. We were all invited to attend the wedding, but as I dare not go out in such stormy weather, Dr. decided not to go. However, eleven went from Lockeford on the train to Lathrop, and from there were taken in carriages to the residence of Mr. Noah Clapp, the bride's father. Those who went were Rev. Pascoe and Ida, Rev. Cooke and Ada, Mary, Hannah and Uncle, Geo. Locke and Susie, Wallace and John G. They went in carriages to Lodi and returned in the same way from Lodi this evening, arriving home about ten o'clock. They were married not far from three o'clock, and then sat down to a sumptuous repast. Lou was richly and beautifully dressed in a dress of purplish wine color, heavily trimmed