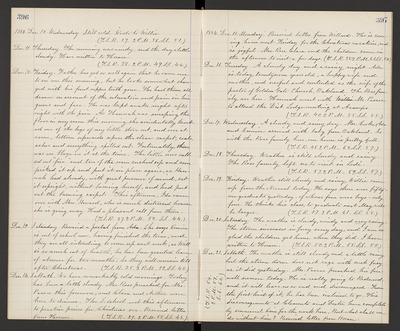 Dec. 12. Friday. Father has got so well again that he came over to see me this morning, but he looks somewhat changed with his front upper teeth gone. He had them all drawn on account of the ulceration and pain in his gums and face. He was kept awake night after night with the pain. As Hannah was sweeping the floor in my room this morning, she accidentally knocked one of the legs of my little stove out, and over it came, bottom upwards upon the straw carpet, coals, ashes and everything spilled out. Fortunately, there was no blaze in it at the time. The little ones called out "fire" and two of the men rushed up and soon picked it up and put it in place again, as Hannah had already, with great presence of mind, set it upright, without burning herself, and had put out the burning carpet. This afternoon, Ida came over with Mrs. Howard, who is much distressed because she is going away. Had a pleasant call from them. (T.S.R. 27. 2 P.M. 52. S.S. 44.)

Dec. 13. Saturday. Received a postal from Ada. She says Eunice is out of school now, having finished the term, and they are all intending to come up next week, as Will is so much out of health, he has been granted leave of absence for two months. So they will remain till after Christmas. (T.S.R. 25. 2 P.M. S.S. 45.)

Dec. 14. Sabbath. We have remarkably cold mornings. Today has been a little cloudy. Mr. Ross preached for Mr. Pascoe this forenoon, and Clara and Arthur were here to dinner. The S. school met this afternoon to practice pieces for Christmas eve. Received letter from Horace. (T.S.R. 29. 2 P.M. 55. S.S. 48.)

Dec. 16. Tuesday. A cloudy day and a rainy night. Ada is today twentyseven years old, a happy wife and mother, and useful and contented as the wife of the pastor of Golden Gate Church, Oakland. The Ross family are here. Hannah went with Mr. Pascoe to attend the Dist. Lodge meeting at Acampo. (T.S.R. 40. 2 P.M. 55. S.S. 55.)

Dec. 21. Sabbath. The weather is still cloudy and a little rainy but the storm dorm does not rage with such fury as it did yesterday. Mr. Pascoe preached his farewell sermon today. He is really going to Redwood, and it will leave us so sad and discouraged. From the first hint of it, he has been inclined to go. His discouragements at Clements and Dexter have completely unnerved him for the work here. But what shall we do without him? Received letter from Horace. (T.S.R. 54. 2 P.M. 57. S.S. 60.)