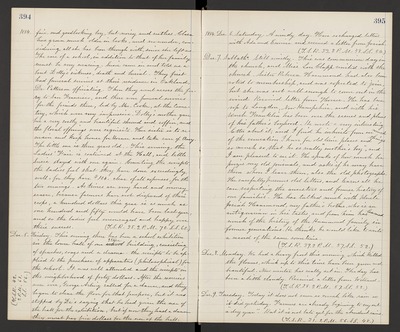 1884. fine, and goodlooking boy, but noisy and restless. Clara has grown much older in looks, and no wonder, considering all she has been through with, since she left us. The care of a school, in addition to that of her family must be very wearing. Susie came in and told us about Dolly's sickness, death and burial. They first had funeral services at their residence in Oakland, Dr. Patterson officiating. Then they went across the ferry to San Francisco, and there were funeral services for the friends there, led by Mr. Cooke, at the Cemetery, which were very impressive. Dolly's mother gave her a very costly and beautiful shroud and coffin, and the floral offerings were exquisite. Her sister is to remain and keep house for Horace and take care of Amy. The little one is three years old. This evening, the Ladies 'Fair is continued at the Hall, and little Susie stayed with me again. Counting the receipts, the ladies feel that they have done exceedingly well, for they have $104. clear of all expenses, for the two evenings. As times are very hard and money scarce, because farmers have not disposed of their crops, a hundred dollars this year is as much as one hundred and fifty would have been last year, and so the ladies feel encouraged and happy over their success. (T.S.R. 35. 2 P.M. 70. S.S. 60.)

Dec. 5. Friday. This evening there has been a school exhibition in the lower hall of our store building, consisting of speeches, songs and a drama - the receipts to be applied to the purchase of apparatus (philosophical) for the school. It was well attended and the receipts in the neighborhood of forty dollars. After the exercises were over, George Arling called for a dance, and they began to clear the floor for that purpose, but it was stopped by Dr.'s saying that he had given the use of the hall for the exhibition, but if now they had a dance they must pay five dollars for the use of the hall. (T.S.R. 42. 2 P.M. 61. S.S. 56.)

Dec. 7. Sabbath. Still windy. This was communion day in the church, and Miss Lou Clapp united with the church. Sister Rebecca Hammond had also been voted to membership, and was expected to join, but she was not well enough to come out in the wind. Received letter from Horace. He has been up to Langdon, New Hampshire, and with his Uncle Franklin has been over the scenes and places of his father's boyhood. He wrote a very interesting letter about it, and I find he inherits from me much of the veneration I have for old time places and things so much so, that he is really "mother's boy", and I am pleased to see it. He speaks of how much he prizes my old journals, and asks if he may have them when I leave them, also the old photographs. He carefully preserves old letters, and learns all he can respecting the ancestors and former history of our families. He has talked much with Uncle Josiah Hammond, my father's brother, who is an antiquarian in his tastes, and from him has learned much of the history of the Hammond family in former generations. He thinks he would like to write a record of the same sometime. (T.S.R. 39. 2 P.M. 57. S.S 52.)

Dec. 8. Monday. We had a heavy frost this morning which killed the flowers, which up to this time have been green and beautiful. Now winter has really set in. The day has been a little cloudy. Received a letter from Willard. (T.S.R. 28. 2 P.M. 57. S.S. 52.)