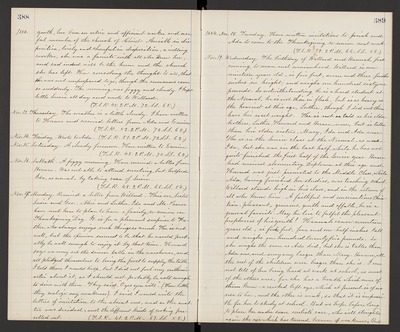 1884. youth, has been an active and efficient worker and useful member of the church of Christ. Amiable in disposition, lively and cheerful in disposition, a willing worker, she was a favorite with all who knew her, and sad indeed will be the home and the church she has left. How consoling the thought to all, that she was not unprepared to go, though the summons came so suddenly. The morning was foggy and cloudy. I kept little Susie all day and wrote to Willard. (T.S.R. 45. 2 P.M. 72. S.S. 65.)

Nov. 17. Monday. Received a letter from Willard. This eve, Sister Susie and Geo., Alice and Luther, Ida and Mr. Pascoe have met here to plan to have a family reunion on Thanksgiving Day. It is for a pleasant surprise to Father, who always enjoys such things so much. He is not well, but the opinion seemed to be that he would probably be well enough to enjoy it by that time. Howard says we may set the dinner table in the warehouse, and all pledged themselves to bring the food to supply the table. I told them I would help, but I did not feel very enthusiastic about it, as I should not probably be well enough to dine with them. They said, "O yes you will." (How little the realize my weakness). I said I would write the letters of invitation to the absent ones, and so the matter was decided, and the different kinds of cooking has called out. (T.S.R. 41. 2 P.M. 67. S.S. 58.)

Nov. 19. Wednesday. The birthday of Willard and Hannah, fast coming to man and womanhood. Willard is now nineteen years old, is five feet, seven and three fourths inches in height, and weighs one hundred sixty one pounds. So notwithstanding he is a hard student at the Normal, he is not thin in flesh, but is as heavy as the heaviest at this age, Luther, though I did not then have his exact weight. He is not as tall as his older brothers, Luther, Howard and Horace were, but is taller than his older sisters, Mary, Ida and Ada were. He is in the Senior class at the Normal, as was Ida, but she was in the last half, while he has not quite finished the first half of the Senior year. Horace had received elementary Diploma at this age and Howard was just promoted to the Middle Class, while Ada, having finished her studies, was teaching school. Willard stands high in his class, and in the esteem of all who know him. A faithful and conscientious Christian, pleasant, generous, gentle and affable, he is a general favorite. May he live to fulfill the pleasant prophecies of his youth! Hannah is now seventeen years old, is five feet, four and one-half inches tall and weighs on hundred twenty five pounds. So she weighs the same as Ada did, but she is taller than Ada was, and every way larger than Mary. However, all the rest of the children were larger than she is. I can not tell of her being hard at work at school, as most of the others were, for she has a trouble which none of them knew, a crooked left eye, which at present is of no use to her, and the other is weak, so that it is impossible for her to study at school. But we hope before long to place her under some oculist's care, who will straighten again the eye which has turned because of weakness. But