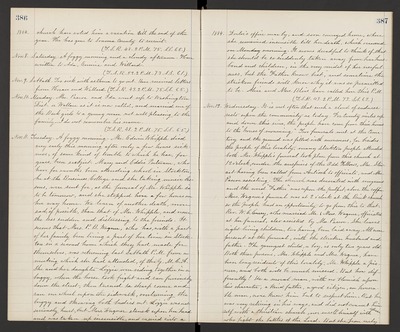 Nov. 11. Tuesday. A foggy morning. Mr. Edwin Whipple died very early this morning after only a few hours sickness, of some kind of trouble to which he has, for years, been subject. Mary and Eddie Putnam, who have for months been attending school in Stockton, he at the Business College and she taking music lessons, were sent for, as the funeral of Mr. Whipple is to be tomorrow, and she stopped here a few hours on her way home. We learn of another death, more sad, if possible, than that of Mr. Whipple, and none the less sudden and distressing to the friends. It seems that Mrs. P. B. Wagner, who has, with a part of her family been living a part of her time in Stockton in a second home which they had made for themselves, was returning last Sabbath P.M. from a meeting which she had attended, of the Y.M.C.A. She and her daughter Lizzie were riding together in a buggy, when the horse took fright and ran furiously down the street, then turned to sharp corner and ran one wheel upon the sidewalk, overturning the buggy and throwing both ladies out. Lizzie was not seriously hurt, but Mrs. Wagner struck upon her head and was taken up insensible, and carried into a

1884. Doctor's office near by, and soon conveyed home, where she remained insensible till her death, which occurred on Monday morning. It seems dreadful to think of, that she should be so suddenly taken away from her husband and children, in the very midst of her usefulness, but the "Father knows best," and sometime the stricken friends will know why it was so permitted to be. Alice and Mrs. Blois have called here this P.M. (T.S.R. 43. 2 P.M. 73. S.S. 63.)

Nov. 12. Wednesday. It is not often that such a cloud of sadness rests upon the community as today. For twenty miles up and down this river, the people have come from their homes to the "house of mourning." Two funerals met at the Cemetery and the ground was filled with mourners, for besides the people of this locality, many Stockton people attended both. Mr. Whipple's funeral took place from this church at 12 o'clock under the auspices of the Odd Fellows, Mr. Stewart having been called from Antioch to officiate, and Mr. Pascoe assisting. The church was decorated with evergreens and the word "Father" was upon the pulpit, above the coffin. Mrs. Wagner's funeral was at 2 o'clock at the Brick church so the people had an opportunity to go from this to that. Rev. W. C. Curry, who married Mr. & Mrs. Wagner, officiated at her funeral, also assisted by Mr. Pascoe. She leaves eight living children, two having been laid away. All were present at the funeral, with the stricken husband and father. The youngest child, a boy, is only two years old. Both these persons, Mr. Whipple and Mrs. Wagner, have been long residents of this locality, Mr. Whipple a pioneer, and both will be much missed. But how differently! He a moral man, with no blemish upon his character, a kind father, a good citizen, an honorable man, none knew him but to respect him. But he was very retiring in his ways, and did not connect himself with a Christian church, nor enroll himself with those who fight the battles of the Lord. But she, from early