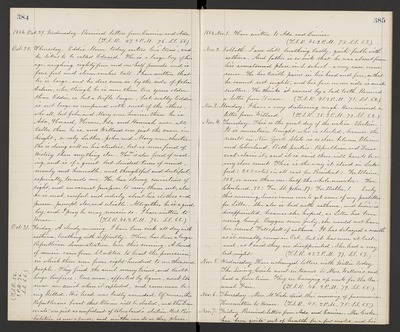 Oct. 30. Thursday. Eddie Moore today enters his "teens", and he likes to be called Edward. He is a large boy of his age, weighing eighty four and one half pounds and is four feet and eleven inches tall. I have written that he is large, and he does seem so by the side of John Calvin, who, though he is more than two years older than Eddie, is but a trifle larger, but really Eddie is not large as compared with most of the others, who all, but John and Mary were heavier than he is. Ada, Howard, Horace, Ida and Hannah were all taller than he is, and Willard was just the same in height, so only Luther, John and Mary were shorter. He is doing well in his studies, but is more fond of History that anything else. He is also fond of reading, and is of a quiet but decided turn of mind, manly and honorable, and thoughtful and dutiful, especially towards me. He has strong convictions of right, and an earnest purpose to carry them out, also he is neat, careful and orderly about his clothes and person, prompt, also, and reliable. Altogether he is a good boy, and I pray he may remain so. I have written to Horace. (T.S.R. 46. 2 P.M. 76. S.S. 66.)

Oct. 31. Friday. A cloudy morning. I have been sick all day with asthma, breathing with difficulty. There has been a large Republican demonstration here this evening. A band of music came from Stockton to head the procession, in which there were from eight hundred to one thousand people. They fired the anvil many times, and built huge bonfires. One man, affected by liquor, went too near an anvil when it exploded, and came near being killed. His head was badly wounded. Of course, the Republicans boast that Blaine will be elected, and the Democrats are pist as confident of Cleveland's election. But Prohibition is now a power, and neither can do as they please. (T.S.R. 56. 2 P.M. 76. S.S. 66.)

Nov. 2. Sabbath. I am still breathing badly, quite feeble with asthma. And father is so sick that he was absent from his accustomed place in S. school, a very rare occurrence. He has terrible pains in his head and face, so that he cannot rest nights, and his face on one side is much swollen. He thinks it caused by a bad tooth. Received a letter from Horace. (T.S.R. 41. 2 P.M. 71. S.S. 62.)

Nov. 4. Tuesday. This is the great day of the nation, Election. It is uncertain tonight who is elected, because the result in New York State is so close between Blaine and Cleveland. Both parties, Republican and Democrat claim it, and it is said there will have to be a very close count. This is the way it stood in Lockeford: 203 votes in all cast for President: For Blaine, 108, or more than one-half the whole number: For Cleveland, 77: For St. John, 17: For Butler, 1. Early this morning, Susie came over to get some of my pastilles for Lilla. She also is bad with asthma, and Susie is disappointed, because she hoped, as Lilla has been using Comp. Oxygen since July, she would not have her usual Fall spell of asthma. It has delayed a mouth as it usually comes in Oct., but it has come at last, and, as I said they are disappointed. She had a very bad night. (T.S.R. 43. 2 P.M. 77. S.S 67.)

Nov. 7. Friday. Received letters from Ada and Eunice. Mr. Cooke has been quite out of health for a few weeks, and his