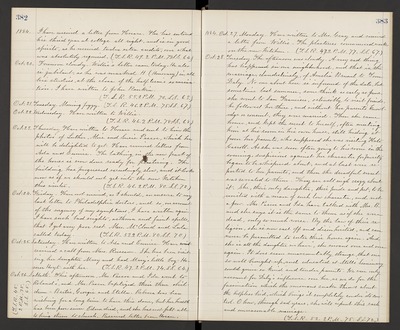 Oct. 23. Thursday. Have written to Horace and sent to him the photos of Luther, Alice and Susie Pascoe, which he will be delighted to get. Have received letters from Ada and Eunice. The lathing in the new part of the house is now done ready for plastering. The building has progressed exceedingly slow, and it looks now as if we should not get into the new kitchen this winter. (T.S.R. 46. 2 P.M. 80. S.S. 72.)

Oct. 24. Friday. Have not received, as I should, an answer to my last letter to Philadelphia doctors, and so on account of the urgency of my symptoms, I have written again. I have such bad nights, asthma and faint spells, that I get very poor rest. Mr. McCloud and Lula called today. (T.S.R. 52. 2 P.M. 80. S.S. 70.)

Oct. 26. Sabbath. This afternoon, Mr. Pascoe and Ida went to Roland's and Mr. Pascoe baptized their three children, Bertie, Georgie and Stella. Rebecca has been wishing for a long time to have this done, but her health has been poor since Edna died, and she has not feel able to bring them to church. Received letter from Horace. (T.S.R. 45. 2 P.M. 75. S.S. 65.)

Oct. 28. Tuesday. The afternoon was cloudy. A very sad thing has happened in our neighborhood, and that is the marriage. clandestinely, of Amelia Bruml to Tom Daly. No one about here is informed of the date, but sometime last summer, some think as early as June, she went to San Francisco, ostensibly to visit friends, he followed her there, and without her parents knowledge or consent, they were married. Then she came home, and kept the secret to herself, often meeting him at his room in h is own house, still hiding it from her parents, who supposed she was visiting Kate Carroll. As she was seen often going to his room in the evening, suspicious against her character for purity began to be whispered about, and at last were reported to her parents, and then the dreadful secret was revealed to them. They are well nigh crazy about it. She, their only daughter, their pride and pet, to be united with a man of such low character, and not a Jew. Mr. Pascoe and Ida have talked with Mrs. B. and she says it is the same to them as if she were dead, only so much worse. By the law of their religion, she is now cast off and disinherited, and can never be permitted to inter their house again. "And she is all the daughter we have", she moans over and over again. It does seem unaccountable strange, that one so well brought up, and educated at Mill's Seminary could grieve so kind and tender parents. We can only for Daly's influence over her, as we do for the fascination which the venomous snake throws about the helpless bird, which brings it completely under its control. O how, through sad years, she will repeat this rash and unreasonable marriage. (T.S.R. 52. 2 P.M. 75. S.S. 72.)