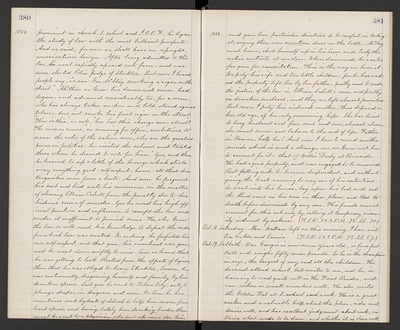 1884. prominent in church, S. school and I.O.O. F., he began the study of law with the most brilliant prospects. And we said, for once we shall have an upright, conscientious lawyer. After being admitted to the bar, he went rapidly upward into favor, and was soon elected Police Judge of Stockton. But soon I heard people say, "we saw Geo. McStay smoking a cigar on the street." Ah! then we knew his downward course had begun, and advanced considerably too, for a man who has always taken an open and bold stand against tobacco, does not smoke his first cigar on the street. How is this, we ask, how has this change come about? The answer comes, "in running for office, ambitious to secure the votes of the saloon men. who are the greatest power in politics, he visited the saloons and treated those whom he desired to vote for him. "Yes, and there he learned to sip a little of the beverage which steals away everything good self respect, honor all that distinguishes man from a brute. And soon he perjured his soul and lied unto his conscience in the matter of clearing Ellison Cahill from the penalty due to his hideous crime of murder. Yes, he used his high official position and influence to count the law and under it inefficient to punish crime. He, who knew the law so well, used his knowledge to defeat the ends for which law was created. In so doing, he forfeited his own self respect, and that gone, his manhood was gone, and he went down swiftly to ruin. Soon we heard that he was getting to look bloated from the effects of liquor, the that he was obliged to leave Stockton, because he was continually disgracing himself and family by his drunken sprees. Last year he went to Tulare City, only to plunge deeper in disgrace and ruin. We learn he has sometimes used hydrate of chloral to help him recover from hard sprees, and having lately been drinking harden than usual he went to a physician, who put up some for him

1884. and gave him particular directions to be careful in taking it, saying there were seventeen doses on the bottle. McStay went home, shut himself up in his room and took the entire contents at one close. When discovered, he was too far gone for resuscitation. This is the way we hear it. We pity his wife and two little children, for he has wasted the property left her by her father, partly used to evade the justice of the law in Ellison Cahill's case, and partly in drunken revelries, and they are left almost penniless. But more I pity his widowed mother, thus deprived in her old age, of her only remaining hope. She has lived to bury husband and four sons and now, almost alone, she must sorrow and labor to the end of life. Father in Heaven, help her! And now I have to record mother suicide which is such a strange one, we know not how to account for it, that of Willie Derby at Riverside. Her had a good property, and was engaged to be married. But falling sick, he became despondent, and without giving the least warning to any one of his intentions, he went into his house, lay upon his bed, and cut the blood veins in his arm in three places, and blad to death before discovered by any one. His friends cannot account for this act, only by calling it temporary insanity induced by sickness. (T.S.R. 52. 2 P.M. 78. S.S. 70.)

Oct. 19. Sabbath. Our Georgie is now seven years old, is four feet tall and weighs fifty seven pounds. So he is the champion in size, the largest of any and all the children. He does not attend school, but recites to me, and he is learning to read quite well in the First Reader, and can reckon in small numbers well. He also recites the Golden Text at S. school each week. He is a great worker and a valuable help about the place, rides and drives well, and has excellent judgment about week, noticing what needs to be done, and whether it is done well.