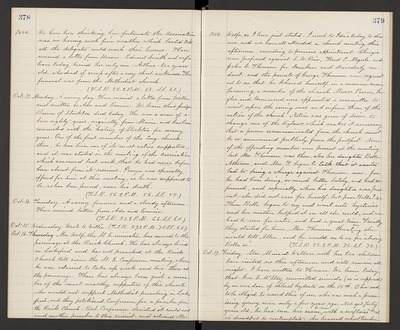 1884. We have been thinking how fortunate the Association was in having such fine weather, which lasted till all the delegates could reach their homes. Have received a letter from Horace. Edward Smith and wife have today buried her only son, Arthur, two years old, who died of croup after a very short sickness. The funeral was from the Methodist church. (T.S.R. 50. 2 P.M. 68. S.S. 61.)

Oct. 13. Monday. A rainy day. Have received a letter from Willie and written to Ada and Eunice. We learn that Judge Brown of Stockton died today. He was a man of above eighty years, originally from Maine, and has been connected with the history of Stockton for many years. One of the first members of the Cong. church there, he has been one of its most active supporters, and it was stated in the meeting of the association which convened last week, that he had never before been absent from its sessions. Prayer was especially offered for him at this meeting, as he was supposed to be, as has been proved, near his death. (T.S.R. 56. 2 P.M. 56. S.S. 55.)

Oct. 16. Thursday. Mr. Wolfe, the M. E. minister, has moved to the parsonage at the Brick Church. he has always lived in Lockeford and has not preached at the Brick Church till since the M. E. Conference meeting, where he was advised to take up work and live there at the parsonage. There has always been quite a number of the most wealthy supporters of this church who would not support Methodist preaching in Lockeford, and they petitioned Conference for a preacher for the Brick Church. But Conference decided it could not send another preacher to this circuit, and advised, Mr.

1884. Wolfe, as I have just stated. I went to Ida's today to dinner, and we have all attended a church meeting this afternoon, according to previous appointment. Charges were preferred against S. W. Rice, Fred C. Megule and John G. Thomson fr drunken and disorderly conduct, and the parents of George Thomson were requested to see that he behaved himself in a manner more becoming a member of the church. Misses, Pascoe, Inglis and Hammond were appointed a committee to wait upon the curing ones and inform them of the action of the church. Notice was given of desire to change one of the Bylaws, which makes it necessary that a person excommunicated from the church must be so announced publicity from the pulpit. None of the offending members were present at the meeting but Mrs. Thomson was there, also her daughter Belle Athearn, and Mrs. T. began to talk that it was too bad to bring a charge against Thomson now, for he had been doing so much better lately, and had reformed, and especially when his daughter was present, she did not care for herself, but poor Bella!. x.c. Then Belle began to cru and went into hysterics and her mother helped it on all she could, and we had to run for water, and had a great time. Finally there started for home. Mrs. Thomson threatening she would tell Allen, and he would see to us for "abusing Bella so." (T.S.R. 53. 2 P.M. 76. S.S. 70.)

Oct. 17. Friday. Mrs. Minard Wallace with her two children have visited us this afternoon and will remain all night. I have written to Horace. We learn today that Geo. E. McStay committed suicide (as is supposed) by an over dose of chloral hydrate on the 15th. O how sad to be obliged to record this of one who was such a promising young man only a few years ago. Not yet forty years old, he has sun his career to ruin with a swiftness which is dreadful to contemplate. An honored school teacher.