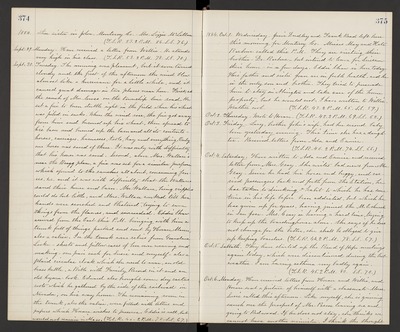 Sept. 30. Tuesday. The morning was pleasant, but it soon turned cloudy and the first of the afternoon the wind blew almost like a hurricane for a little while, and it caused great damage in two places near here. First, at the ranch of Mr. Cross on the township line road. He set a fire to burn stubble right in the field where his wheat was piled in sacks. When the wind rose, the fire got away from him and burned up his wheat, then spread to his barn and burned up the barn and all its contents - horses, carriages, harnesses, tools, hay and everything. Only one horse was saved of three. It was only with difficulty that his house was saved. Second, above Mrs. Wallace's near the Bragg place, a fire was set for a similar purpose which spread to the ranches all about, consuming fences, &.c. and it was with difficulty that the Wallaces saved their house and barn. Mr. Wallace, being crippled could do but little, and Mrs. Wallace worked till her hands were scorched and blistered, trying to save things from the flames, and succeeded. Eddie Shaw arrived from the East this P.M. bringing with him a trunk full of things packed and sent by Horace Mann, also a valise. In the trunk were relics from Grandma Locke - sheets and pillow-cases of her own weaving and making - one pair each for Susie and myself - also a plaid circular cloak which she used to wear, and old brass kettle, a Bible with Family Record in it and an old hymn-book. Edward also brought some dry cactus roots which he gathered by the side of the railroad in Nevada, on his way home. The remaining room in the trunk. also the valise, were filled with letters and papers which Horace wishes to preserve. Eddie well, but would not remain in Mass.(T.S.R. 46. 2 P.M. 78. S.S. 67.)

1884. Oct. 1. Wednesday. Josie Dudley and Frank Read left here this morning for Monterey Co. Misses May and Kate Barbour called this P.M. They are visiting their brother - Dr. Barbour - but intend to leave for Suisun, their home-in a few days. Eddie Shaw is here today. His father and sister Joan are in feeble health, and he is the only son and brother. They tried to persuade him to stay in Abington and take care of the home property, but he would not. I have written to Willie. Weather cool. (T.S.R. 43. 2 P.M. 65. S.S. 59.)

Oct. 4. Saturday. Have written to Ada and Eunice and received letter from Mrs. gray. She writes bad news from Mr. Gray. Since he had his horse and buggy, and carried passengers back and forth from the Station, he has taken to drinking a habit to which he has sometime in his life before been addicted, but which he has given up for years, having joined the M.E. church in San Jose. Mrs. Gray is having a hard time, trying to keep up the boarding house alone. She says if he does not change for the better, she shall be obliged to give up keeping boarders. (T.S.R. 44. 2 P.M. 78. S.S. 67.)

Oct. 6. Monday. Have received letters from Horace and Willie, and Horace sent picture of himself with a classmate - Morse. Susie called this afternoon. Like myself, she is grieving much over the prospect of Mr. Pascoe leaving us and going to Redwood. If he does not stay, she thinks we cannot have another minister. I think the thought