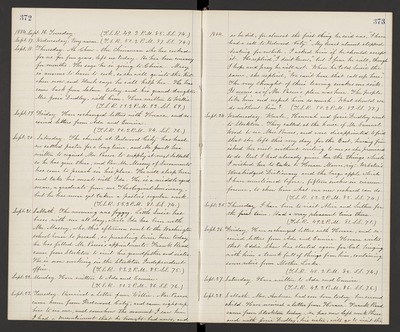 Sept. 18. Thursday. Ah Chow - the Chinaman who has cooked for us for four years, left us today. He has been uneasy for months. He says he is going to China. Mary is anxious to learn to cook, so she will go into the kitchen now, and Uncle says he will help her. He has come back from Selma today, and his grand-daughter. Mrs. Josie Dudley, with him. Have written to Willie. (T.S.R. 53. 2 P.M. 82. S.S. 69.)

Sept. 20. Saturday. The church at Redwood City has had no settled pastor for a long time, and Mr. Jewett has written to request Mr. Pascoe to supply it next Sabbath, so he has gone there, and Rev. Mr. Massey of Sacramento has come to preach in his place. He will sleep here and take his meals with Ida. he is a middle aged man, a graduate from our Theological Seminary, but he has never yet taken a pastor's regular work. (T.S.R. 55. 2 P.M. 81. S.S. 74.)

Sept. 21. Sabbath. The morning was foggy. Little Susie has been with me all day, while Ida has been with Mr. Massey, who this afternoon went to the Washington school house to preach, so preachng twice here today he has filled Mr. Pascoe's appointments. Frank Read came from Stockton to visit his grandfather and sister. He is now working in the Stockton Independent office. (T.S.R. 53. 2 P.M. 85. S.S. 75.)

Sept. 23. Tuesday. Received a letter from Willie. Mr. Pascoe came home from Redwood City, and came right up here to see me, and somehow the moment I saw him I had a presentiment that he bought bad news, and

1884. so he did, for almost the first thing he said was, "I have had a call to Redwood City." My heart almost stopped beating for awhile. I asked him if he should accept it. He replied, "I don't know," but I fear he will, though I hope and pray he will not. When he told Susie the same, she replied, "We can't hear that call up here." The very thought of their leaving makes me sick. It seems as if Mr. Pascoe's place was here. The people like him and respect him so much. What should we do without him? (T.S.R. 50. 2 P.M. 89. S.S. 77.)

Sept. 24. Wednesday. Uncle, Hannah and Josie Dudley went to Stockton. They called at the house of Mr. Samuel Wood to see Mrs. Powers, and were disappointed to find that she left this very day for the East, having finished her visit without writing to me, as she promised to do. But I had already given her the things which I wished her to take to Horace Mann. viz! Webster's Unabridged Dictionary and the large apple which I have mentioned before, fifteen inches in circumference, to show him what our new orchard can do. (T.S.R. 52. 2 P.M. 85. S.S. 74.)

Sept. 26. Friday. have exchanged letters with Horace, and received letters from Ada and Eunice. Horace writes that Eddie Shaw has started again for Cal. bringing with him a trunk full of things from him, containing some relies from Mother Locke. (T.S.R. 48. 2 P.M. 82. S.S. 74.)

Sept. 28. Sabbath. Mrs. Ambrose had son born today - her second child. Have received a letter from Horace. Frank Read came from Stockton today. He has now left work there and with Josie Dudley, his sister. will go to visit the