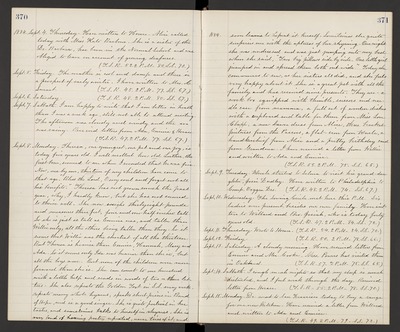 Sept. 8. Monday. Theresa, our youngest, our pet and our joy, is today five years old. I will recollect how old Luther, the first born, seemed to me when I recorded that he was five. Now, one by one, thirteen of my children have come to that age. "Bless the Lord, O my soul and forget not all his benefits." Theresa has not grown much the past year, why, I hardly know, but she has not seemed to thrive well. She now weighs thirtyeight pounds and measures three feet, four and one-half inches tall. So she is just as tall as Eunice was, and taller than Willie only, all the others being taller than they. So it seems that Willie was the shortest of all the thirteen. But Theresa is heavier than Eunice, Hannah, Mary and Ada. So it seems only Ida was heavier than she is, but all the boys were. But none of the children were more forward than she is. She can count to one hundred with a little help and reads in words of two or three letters. She also repeats the Golden Text in S.S. every week, repeats many whole hymns, speaks short pieces in Band of Hope, and is a good singer. She is quite poetical in her tastes, and sometimes talks to herself in rhymes. She is very fond of hearing poetry repeated, never tires of it, and

1884. soon learns to repeat it herself. Sometimes she quite surprises me with the aptness of her rhyming. One night she was undressed and was just jumping into my bed when she said, "Two big pillows side by side, One little girl jumped in and spread them both out wide." Today she commences to sew, as her sisters all did, and she feels very happy about it. She is a great pet with all the family and has received nine presents. They are - a work-box equipped with thimble, scissors and needle case from mamma, a full set of wooden dishes with a cupboard and table for them from Miss Lou Clapp, a new lawn dress from Alice, three bracket pictures from the Pascoes, a flat-iron from Uncle, a handkerchief from Alice and a pretty birthday card from Grandma. I have received a letter from Willie and written to Ada and Eunice. (T.S.R. 55. 2 P.M. 75. S.S. 65.)