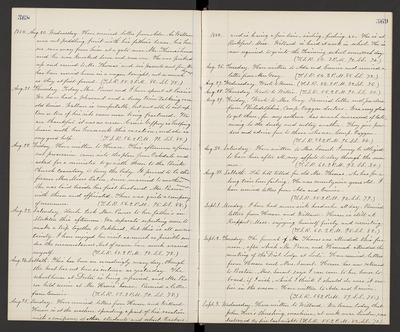 1884. Aug. 20. Wednesday. Have received letter from Ada. As Wallace was out peddling fruit with his father's team, his horses ran away from him at a gate near Mr. Thomas' house and he was knocked down and run over. He was picked up and carried to Mr. Thomas' and his parents sent for. He has been carried home in a wagon tonight, not so much hurt as the at first feared. (T.S.R. 55. 2 P.M. 86. S.S. 75.)

Aug. 21. Thursday. Today Mrs. Powers and I have spent at Susie's. We have had a pleasant and a busy time talking over old times. Wallace is comfortable, but not able to sit up. One or two of his ribs came near being fractured. We are thankful it was no worse. Carrie Geffrey is helping Susie with her house work this vacation, and she is very good help. (T.S.R. 56. 2 P.M. 91. S.S. 80.)

Aug. 22. Friday. Have written to Horace. This afternoon a funeral procession came into the place from Oakland and asked for a minister to go with them to the Buick Church Cemetery to bury the body. It proved to be the former Mrs. Moses Eaton, since married to another man. She was laid beside her first husband. Mr. Pascoe went with them and officiated. There was quite a company of mourners. (T.S.R. 56. 2 P.M. 95. S.S. 88.)

Aug. 23. Saturday. Uncle took Mrs. Powers to her father's in Stockton this afternoon. We separate expecting soon to make a trip together to Oakland, but this is all uncertainty. I have enjoyed her visit as much as possible under the circumstances, but of course have much wearied myself. (T.S.R. 60. 2 P.M. 98. S.S. 78.)

Aug. 24. Sabbath. This has been an exceedingly weary day, though the heat has not been so intense as yesterday. The school house at Dexter is being repaired, and Mr. Pascoe held service at Mr. Harris house. Received a letter from Eunice. (T.S.R. 52. 2 P.M. 90. S.S. 78.)

Aug. 25. Monday. Have received letters from Horace and Willard. Horace is at the seashore spending a part of his vacation with a company of other students and school teachers,

Aug. 29. Friday. Wrote to Mrs. Gray. Received letter and powders from Philadelphia Comp. Oxygen Doctors. Was very glad to get them, for my asthma has much increased of late, owing to the dusty and sultry weather. They give powders and advice fue to those who use Comp. Oxygen. (T.S.R. 58. 2 P.M. 96. S.S. 84.)

Sept.2 Tuesday. The funeral of Mr. Thomas was attended this forenoon, after which Mr. Pascoe and Hannah attended the meeting of the Dist. Lodge at Lodi. Have received letters from Horace and Mrs. Smart. Horace has now returned to Boston. Mrs. Smart says I can come to her house to board, if I wish, which I think I should do were it earlier in the season. Have written to Ada and Eunice. (T.S.R. 56. 2 P.M. 89. S.S. 75.)