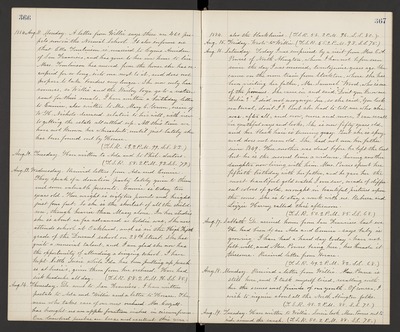 1884. Aug. 11. Monday. A letter from Willie says there are 460 pupils now in the Normal School. It also informs us that Etta Tomlinson is married to Cyrus Amiden of San Francisco, and has gone to her new home to live. Mrs. Tomlinson has moved from the house she has occupied for so long, into one next to it, and does not propose to take boarders any longer. She now only has roomers, so Willie and the Bailey boys go to a restaurant for their meals. I have written a birthday letter to Eunice, also written to Mrs. Mary E. Gowen, niece of W. H. Nichols - deceased - relative to his will, with view to getting the estate all settled up. All this time we have not known her whereabouts, until just lately she has been found out by Horace. (T.S.R. 65. 2 P.M. 99. S.S. 83.)

Aug. 13. Wednesday. Received letters from Ada and Eunice. They speak of a donation party lately given to them and some valuable presents. Eunice is today ten years old. Her weight is sixty two pounds and height just four feet. So she is the shortest of all the children, though heavier than Mary alone. In her studies she is about as far advanced as Eddie was. She now attends school at Oakland, and is in the High Fifth grade of the Durant school on 28th Street. She has quite a musical talent, and I am glad she now has the opportunity of attending singing school. I have kept little Susie while Ida has been putting up peaches at Susie's, given them from her orchard. Have had sick headache all day. (T.S.R. 58. 2 P.M. 96. S.S. 85.)

Aug. 14. Thursday. Dr. went to San Francisco, I have written postals to Ada and Willie and a letter to Horace. The man who takes care of our new orchard. Mr. Corzatt - has brought us an apple fourteen inches in circumference. Our Crawford peaches are large and excellent this year -

Aug. 16. Saturday. Today I was surprised by a visit from Mrs. E.A. Powers of North Abington, whom I have not before seen since the day I was married, twentynine years ago. She came on the noon train from Stockton, where she has been visiting her father, Mr. Samuel Wood, who is one of the pioneers. She came in and said, "Don't you know me Delia?" I did not recognize her, so she said, "You look natural, don't I"? But she had to tell me who she was, after all, and now, more and more, I can recall her youthful ways and looks. She is now fifty years old, and her black hair is turning gray. But she is spry, and does not seem old. She had not seen her father since 1849. Her mother was dead before he left the East but he is the second time a widower, having another daughter now living with him. Mrs. Powers spent her fiftieth birthday with her father, and he gave her the most beautiful gold watch I ever saw, made of different colors of gold, we ought in beautiful pictures upon the covers. She is to stay a week with us. Rebecca and Lizzie Harvey called this afternoon. (T.S.R. 50. 2 P.M. 85. S.S. 68.)