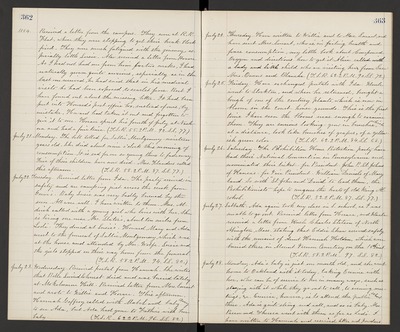 1884. Received a letter from the campers. They were at R.R. Flat, where they were stopping to get their break block fixed. They were much fatigued with the journey, especially little Susie. Also received a letter from Horace. As I had not had one from him for two weeks, I had naturally grown quite anxious, especially as in the last one received, he had said that in his medical visits he had been exposed to scarlet fever. But I have found out about the missing letter. It had been put into Howard's post-office box, instead of ours, by mistake, Howard had take it out and forgotten to give it to me. Horace spent his fourth of July at Nashna and had a fine time. (T.S.R. 55. 2 P.M. 92. S.S. 77.)

July 21. Monday. The bell tolled for Sallie Montgomery, nineteen years old. She died about nine o'clock this morning of consumption. It is sad for one so young thus to fade away. Five of their children have now died. Mrs. Flanders called this afternoon. (T.S.R. 58. 2 P.M. 87. S.S. 77.)

July 22. Tuesday. Received letter from Ida. The party arrived in safety and are camping just across the creek from Greve's. Baby Susie was very badly burned by the sun. All were well. I have written to them. Mrs. Aldrich called with a young girl who lives with her. She is living our near Mr. Slater's, about ten miles from Lodi, They dined at Susie's. Howard, Mary and Ada went to the funeral of Sallie Montgomery, which was at the house and attended by Mr. Wolfe. Susie and the girls stopped on their way home from the funeral. (T.S.R. 58. 2 P.M. 94 S.S. 80.)

July 23. Wednesday. Received postal from Hannah. She writes that Belle Swindlerhurst died and was buried lately at Mokelumni Heill. Received letter from Mrs. Smart and wrote to Willie and Horace. This afternoon, Hannah Geffroy called with Mabel and baby Amy to see Ada, but Ada had gone to Father's with her baby. (T.S.R. 62. 2 P.M. 96. S.S. 82.)

July 24. Thursday. Have written to Willie and to Mrs. Smart, and have such Mrs. Smart, who is in failing health and fears consumption, my little book about Compound Oxygen and directions how to get it. Alice called with a lady and little child who are visiting her from Sac. Mrs. Owens and Blanche. (T.S.R. 62. 2 P.M. 90. S.S. 72.)

July 25. Friday. Have exchanged postals with Ida. Uncle went to Stockton, and when he returned, brought a bough of one of the century plants, which is now in bloom in the court house grounds. This is the first time I have seen the blooms near enough to examine them. They are serious looking grow in bunches, which at a distance, look like bunches of grapes, of a yellowish green color. (T.S.R. 62. 2 P.M. 84. S.S. 68.)

July 26. Saturday. The Prohibition Home Protection party have had their National Convention in Pennsylvania and nominated their ticket - for President - John P. St. Johns of Kansas - for Vice President - William Daniels of Maryland. So with "St. John and Daniel" to lead them, the Prohibitionists hope to conquer the hosts of old king Alcohol. (T.S.R. 52. 2 P.M. 87. S.S. 77.)

July 27. Sabbath. Ada again took my class in S.school , as I was unable to go out. Received letter from Horace, and Uncle received a letter from Uncle Charles Stetson of North Abington, Mass, stating that Eddie Shaw arrived safely with the remains of Aunt Hannah Holden, which were buried there in the Mount Vernon Cemetery on the 16th inst. (T.S.R. 58. 2 P.M. 97. S.S. 82.)

July 28. Monday. Ada's baby is just one month old, and she went home to Oakland with it today, taking Eunice with her, who can be of service to her in many ways, such as staying with it while they go out to call, to evening meetings, &.c. Eunice, however, is to attend the public school there. Ada is quite strong and well, and so is baby. Mr. Pascoe and Theresa went with them as far as Lodi. I have written to Hannah and received letter and powders