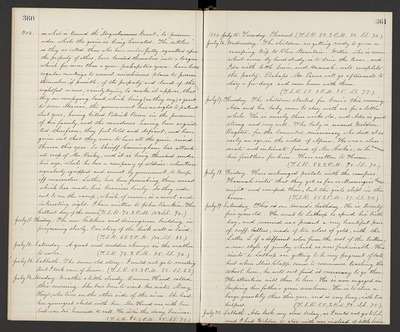 1884. on what is termed the Moquelumous Grant," to preserve order while the grain is being harvested. The "settlers" as they are called - those who have unlawfully squatted upon the property of others, have banded themselves into a league which for more than a year - perhaps two years - have held regular meetings to concert mischievous plans to possess themselves, if possible, of the property and land of the rightful owners, vainly trying to make it appear, that they are occupying land, which being (as they say) a grant to some Mexican, the government has no right to patent. Last year, having killed Patrick Brun in the presence of his family, and the murderers having been acquitted therefrom, they feel bold and defiant, and have given out that they were to have all the grain raised thereon this year. So Sheriff Cunningham has attached crop of Mr. Bailey, and it is being thrused under his eye, while he has a company of soldiers - volunteers regularly equipped and aimed by government, to keep off marauders. Luther has been furnishing them must which has made his business lively. So they rode out to see the camp, which of course, is a novel and interesting sight. I have written to John Rankin. The hottest day of the season. (T.S.R. 70. 2 P.M. 102 S.S. 90.)

July 14. Monday. Weather a little cloudy. Emma Hurd called this morning. She has been to visit her sister Mary Hoyt, who lives on the other side of the river. She had her youngest child with her. Mr. Hurd was with her but was too hurried to call. He is in the dairy business. (T.S.R. 56. 2 P.M. 85. S.S. 70.)

July 16. Wednesday. The children are getting ready to go on a camping trip to Blue Mountain. Willie, who is some what worn by hard study, is to drive the teano, and Ida with little Susie, and Hannah, will complete the party. Perhaps Mr. Pascoe will go afterwards to stay a few days and come home with them. (T.S.R. 58 2 P.M. 85 S.S. 77.)

July 17. Thursday. The children started for Greve's this morning. Ada and her baby came to stay with us for a little while. He is nearly three weeks old, and Ada is quite strong and very well. The baby is named Weldon Bagser, for the lamented missionary who died also early an age, in the wilds of Africa. He was a classmate and intimate friend of Mr. Cooke's, so he names his first born for him. Have written to Horace. (T.S.R. 58. 2 P.M. 90. S.S. 70.)

July 19. Saturday. This is our Howard's birthday. He is twentyfive years old. He went to Lathrop to spend his birthday, and received a present a very beautiful pair of cuff buttons, made of two colors of gold, with the Letter L of a different color from the rest of the button, a new style of jewelry which is now fashionable. His visits to Lathrop are getting to be very frequent of late, but when Miss Clapp comes to commence teaching the school here, he will not find it necessary to go there. The attraction will then be here. He is now engaged in keeping his father's grain warehouse. He is to store a large quantity there this year, and is very busy, with two helpers. (T.S.R. 55. 2. P.M. 92. S.S. 75.)

July 20. Sabbath. Ada took my class today, as I could not go to S.S. and I had Weldon to stay with me instead of little Susie.