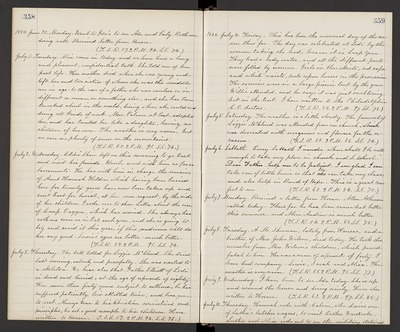 July 1. Tuesday. Alice came in today and we have had a long and pleasant, confidential talk. She told me of her past life. Her mother died when she was young and left her and two sisters - of whom she was the middle one in age - to the care of a father who was careless or indifferent or mean, or something else, and she has been knocked about in the world, living where she could and doing all kinds of work. Mrs. Palmer, at last, adopted her, and has treated her like a daughter, having no children of her own. The weather is very warm, but we can see plenty of snow on the mountains. (T.S.R. 60. 2 P.M. 91. S.S. 74.)

July 2. Wednesday. Eddie Shaw left us this morning to go East and visit his friends. Uncle went with him as far as Sacramento. He has with him in charge the remains of Aunt Hannah Holden which having been buried here for twenty years have now been taken up and sent East for burial, at her own request, by the side of her children I rode over to show Lilla about the use of Comp. Oxygen, which has arrived. She always has asthma come on in Oct. each year, and she is going to try and avoid it this year, if this medicine will do her any good. Susie's eyes are better - much better. (T.S.R. 58. 2 P.M. 91. S.S. 74.)

July 3. Thursday. The bell tolled for Lizzie McCloud. She died last-evening, calmly and peacefully. She wasted to a skeleton. We hear also that Father Elliott of Lodi is dead and buried, at the age upwards of eighty. For more than forty years subject to asthma, he has suffered patiently his allotted time, and has gone to rest. Always tune to his Christian convictions and principles, he set a good example to his children. Have written to Horace. (T.S.R. 57. 2 P.M. 94. S.S. 76.)

1884. July 4. Friday. This has been the warmest day of the season thus far. The day was celebrated at Lodi by the women taking the lead, because it is Leap year. They had a lady orator, and all the different parts were filled by women. Girls in blue skirts, red caps and white waists, rode upon horses in the procession. The exercises were in a large picnic tent by the grove. Willie attended, and he says it was just sweltering hot in the tent. I have written to the Philadelphia C.O doctors. (T.S.R. 56. 2 P.M. 97. S.S. 78.)

July 5. Saturday. The weather is a little cloudy. The funeral of Lizzie McCloud was attended from our church, which was decorated with evergreens and flowers for the occasion. (T.S.R. 58. 2 P.M. 86. S.S. 74.)

July 10, Thursday. Hannah rode with Calvin, who drives one of Luther's butcher wagons, to visit Esther Wardrobe. Luther and Alice rode out to see the military stationed.