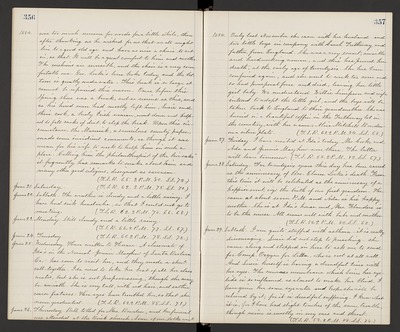 1884. was too much overcome for words for a little while, then after thanking us he wished for as that we all might live to a good old age and have as nice a chair to sit in, as that. It will be a great comfort to him and mother. The cushions are reversible, and the chair is a very comfortable one. Geo. Locke's lever broke today and the bottom is greatly underwater. This break is so large it cannot be repaired this season. Once before this Spring there was a break, not so serious as this, and as his kind men had mostly left him, Susie and their cook, a burly Irish woman, went down and helped to fill sacks of dirt, to stop the break. Upon this circumstance, the Maverick, a scurrilous county paper, made some invidious comments, as though it was mean for his wife to work to help him in such a place. Calling him "the philanthropist of the live oaks" it frequently has remarks to make about him and many other good citizens, designed as sarcasm. (T.S.R 65. 2 P.M. 80. S.S. 72.)

June 25. Wednesday. Have written to Horace. A classmate of Ida,s in the Normal - Jennie Mayhow of Santa Barbara Co. - has come to visit her, and they made a short call together. Ida used to like her best of all her classmates, but she is not prepossessing, though she may be amiable. She is very tall, with red hair, and rather coarse features. Her eyes have troubled her, so that she never graduated. (T.S.R. 62. 2 P.M. 85. S.S. 71.)

June 26. Thursday. Bell tolled for Mrs. Bowden, and her funeral was attended at the Buick church. Some of our folks went.

1884. Only last November she came with her husband and two little boys in company with Saml Tretheway and father from England. She was a very smart, amiable and hardworking woman, and this has proved her death, at the early age of twenty six. She has been confined again, and she went to work too soon and so had puerperal fever and died, leaving her little girl baby. We understand Willie Simpson and wife intend to adopt the little girl, and the boys will be taken back to England to their grandmother. She was buried in a beautiful coffin in the Tretheway lot in the cemetery, with her name, Alice Mitchell Bowden on a silver plate. (T.S.R. 60. 2 P.M. 84. S.S. 68.)

June 28. Saturday. For twenty six years this day has been sacred as the anniversary of Bro. Elmer Locke's death. From this time it will be celebrated as the anniversary of a happier event, viz! the birth of our first grandson. He came at about seven P.M. and Ada is his happy mother. She is at Ida's house and Mrs. Flanders is to be the nurse. All seems well with babe and mother. (T.S.R. 56. 2 P.M. 80. S.S. 60.)

June 29. Sabbath. I am quite stuffed with asthma - it is really discouraging. Susie did not step to preaching - she came along and stopped in here to ask me to send for Comp. Oxygen for Lilla, who is not at all well. And Susie herself is having a dreadful time with her eyes. The mucus membrane which lines her eyelids is so inflamed as almost to make her blind. I have given her some eye water and hope she will be relieved by it, for it is dreadful suffering. I know what it is, for I have had slight touches of the same trouble, though mine is mostly in my ears and throat. (T.S.R. 52. 2 P.M. 88. S.S. 74.)