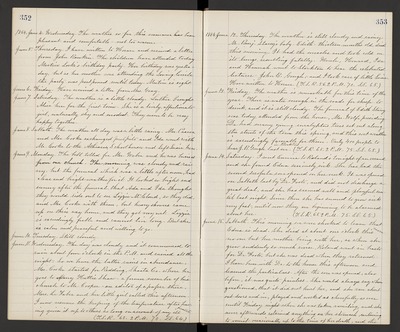 1884. June 4. Wednesday. The weather so far this summer has been pleasant and comfortable - not too warm.

June 5. Thursday. I have written to Horace and received a letter from John Rankin. The children have attended today Mertice Locke's birthday party. Her birthday was yesterday, but as her mother was attending the Sewing Circle the party was postponed until today. Mertice is eight.

June 6. Friday. Have received a letter from Mrs. Gray.

June 7. Saturday. The weather is a little cloudy. Luther brought Alice here for the first time. She is a lively, affectionate girl, naturally shy and modest. They seem to be very happy together.

June 8. Sabbath. The weather all day was a little rainy. Mr. Pascoe and Mr. Cooke exchanged pulpits and Ida went with Mr. Cooke to the Athearn School house and left Susie here.

June 9. Monday. The bell tolled for Mr. Weber and he was buried from our church. The morning was cloudy and rainy, but the funeral which was a little after noon, had clear and bright weather for it. It looked so bright and sunny after the funeral, that Ada and Ida thought they would ride out to see Lizzi McCloud, so they did, and Mr. Cooke with them, but heavy showers came up on their way home, and they got very wet. Lizzie is exceedingly feeble and cannot live long. But she is calm and peaceful and willing to go.

June 11. Wednesday. The day was cloudy and it commenced to rain about four o'clock in the P.M. and rained all the night. So we have the latter rains in abundance. Mr. Cooke started for Redding, Shasta Co. where he goes to marry Hattie Shaw - a former member of his church to Mr. Cooper - an editor of a paper there. Mrs. Le Faber and her little girl called this afternoon. I now resume the keeping of the temperature after having given it up to others so long on account of my ill health. (T.S.R. 60. 2 P.M. 70. S.S. 64.)

1884. June 12. Thursday. The weather is still cloudy and rainy. Mr. Benj Stacey's baby, Edith - thirteen months old, died this morning. It had the measles and took cold on its lungs, resulting fatally. Uncle, Howard, Ida and Hannah went to Stockton to hear the celebrated lectures - John B. Gough, - and I took care of little Susie. Have written to Horace. (T.S.R. 56. 2 P.M. 70. S.S. 65.)

June 13. Friday. The weather is remarkable for this time of the year. There is water enough in the roads for sheep to drink, and it is still cloudy. The funeral of Edith Stacey was today attended from the house, Mr. Wolfe presiding. Dr. had many young eucalyptus trees set out along the streets of the town this spring, and this wet weather is exceedingly favorable for them. Only 400 people to hear J.B. Gough last eve in Stockton. (T.S.R. 65. 2 P.M. 75. S.S. 65.)

June 14. Saturday. I sent Eunice to Roland's tonight of an errand and she found Edna seriously sick. She has had the second scrofula sore opened on her neck. It was opened on Sabbath last by Dr. Foote, and did not discharge a great deal, and she has seemed well and playful until last night. Since then she has seemed to grow sick very fast, until now they are beginning to be alarmed about her. (T.S.R. 65. 2 P.M. 75. S.S. 65.)

June 15. Sabbath. This morning we were shocked to learn that Edna is dead. She died at about one o'clock this morn, no one but her mother being with her, as when she grew suddenly so much worse. Roland went in haste for Dr. Foote, but she was dead when they returned. I have been with Dr. to the house this afternoon and learned the particulars. After the sore was opened, also before, it was quite painless. She would always say when questioned, that it did not hurt her, and she ran about out doors and in, played and worked as cheerfully as ever until Friday night when she was taken vomiting, and she never afterwards retained anything on her stomach, continuing to vomit occasionally up to the time of her death, and the