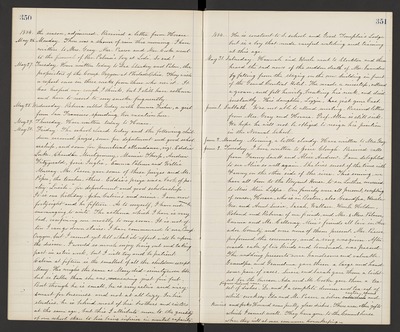 1884. the season, adjourned. Received a letter from Horace.

May 26. Monday. There was a shower of rain this morning. I have written to Mrs. Gray. Mr. Pascoe and Mr. Cooke went to the funeral of Rev. Palmer's boy at Lodi. So sad!

May 27. Tuesday. Have written today to Drs. Starkey and Palen, the proprietors of the Comp. Oxygen at Philadelphia. They wish a report once in three weeks from those who use it. It has helped my cough , I think, but I still have asthma and have to resort to my smoke frequently.

May 29. Thursday. Have written today to Horace.

May 30. Friday. The school closed today and the following children received prizes, some for department and good scholarship, and some for punctual attendance, viz!. Eddie Locke, Chandler Montgomery, Mamie Thorp, Andrew Fitzgerald, Josie Inglis, Emma Palmer and Willie Murray. Mr. Pascoe gave some of these prizes and Mr. Piper, the teacher, others. Eddie's prize was a book of poetry, "Lucile", for department and good scholarship. It is our birthday, John Calvin's and mine. I am now forty eight and he fifteen. As to myself, I have not much encouraging to write. The asthma which I have is very bad, confining me mostly to my room. It is not often I can go down stairs. I have commenced to use Comp. Oxygen, but I cannot yet tell what its effect will be upon the disease. I would so much enjoy being out and taking part in action work, but I will try and be patient. Calvin at fifteen is the smallest of all the children except Mary. He weighs the same as Mary did, ninety seven lbs. but is taller than she was, measuring just five feet. But though he is small, he is very active and very smart for business and not at all lazy. In his studies, he is behind most of his brothers and sisters at same age, but this I attribute more to the quality of our school than to his being inferior in mental capacity.

1884. He is constant to S. school and Good Templar's Lodge but is a boy that needs careful watching and training at this age.

May 31. Saturday. Hannah and Uncle went to Stockton and there heard the sad news of the sudden death of Mr. Saunders by falling from the staging on the new building in front of the Grand Central Hotel. He made a misstep, uttered a groan, and fell heavily, breaking his neck, and died instantly. His daughter, Lizzie, has just gone East.

June 1. Sabbath. Was not able to attend meeting. Received letters from Mrs. Gray and Horace. Prof. Allen is still sick. We hope he will not be obliged to resign his position in the Normal School.

June 3. Tuesday. I have written to Josie Clough. Received calls from Fanny Swett and Alice Andrew. I am delighted to see Alice so well again. She lives most the time with Fanny on the other side of the river. This evening, we have all been to the Bryant House to see Luther married to Miss Alice Lippe. Our family were all present, excepting of course, Horace, who is in Boston, also Grandpa, Uncle Geo. and Aunt Susie, Sarah, Wallace, Uncle Holden, Roland and Rebecca of our friends, and Mr. & Mrs. Palmer, Emma and Mr. Calloway, Alice's friends all live in Amador County, and were none of them present. Mr. Pascoe performed the ceremony, and a ring was given. Afterwards cake of two kinds and lemonade was passed. The wedding presents were handsome and valuable. Grandpa and Grandma gave them a large and handsome pair of vases. Susie and Sarah gave them a toilet set for the burean Ada and Mr. Cooke gave them a tea - figure colored ware set of dishes. Dr. and I a complete dinner and tea-set of white crockery. Ida and Mr. Pascoe a silver castor, spoons and knives and forks. Howard some pretty glass dishes. There were other gifts which I cannot recall. They have gone to the Cement house where they will at once commence housekeeping.