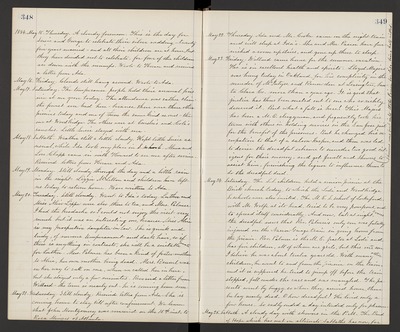 1884. May 15. Thursday. A cloudy forenoon. This is the day for Susie and George to celebrate their silver wedding - twenty five years married - and all thin children are at home, but they have decided to celebrate, for four of the children are down with the mumps. Wrote to Horace and received a letter from Ada.

May 16. Friday. Clouds still hang around. Wrote to Ada.

May 17. Saturday. The temperance people held their annual picnic at our grove today. The attendance was rather slim the fewest ever had here - because there were three other picnics today and one of them the same kind as ours - the one at Woodbridge. The others were at Emslee's and Cole's ranches. Little Susie stayed with me.

May 18. Sabbath. Weather still a little cloudy. Kept little Susie as usual, while Ida took my place in S. school. Alma and Lou Clapp came in with Howard to see me after service. Received letters from Horace and Ada.

May 19. Monday. Still cloudy through the day and a little rain in the night. Lizzie McLellan and children have left us today to return home. Have written to Ada.

May 20. Tuesday. Still cloudy. Went to Ida's today. Luther and Miss Alice Lippe were also there to tea, and Mrs. Palmer. I had the headache so I could not enjoy the visit very much but it was an interesting one, because Miss Alice is my prospective daughter-in-law. She is quick and lively, of nervous temperament and dark hair, so if there is anything in contrasts, she will be a suitable mate for Luther. Mrs. Palmer has been a kind of foster, mother to Alice, her own mother being dead. Mrs. Bruml was on her way to call on me, when we called her in here, but she stayed only a few minutes. Received a letter from Willard - the term is nearly out - he is coming home soon.

May 21. Wednesday. Still cloudy. Received letter from Ada. She is coming home to stay till after confinement. We learn that John Montgomery was married on the 15th inst. to Rosa Minged of Atlanta.

May 22. Thursday. Ada and Mr. Cooke came on the night train and will sleep at Ida's. She and Mr. Pascoe have furnished a room upstairs, and gone up there to sleep.

May 23. Friday. Willard came home for the summer vacation. He is in excellent health and spirits. Lloyd Majors was hung today in Oakland, for his complicity in the murder of McIntyre and Renowden at Lexington, Santa Clara Co. more than a year ago. It is a good that justice has thus been meted out to tone who so richly deserved it. But what a fall is here! This Majors has been a M. E. clergyman, and frequently took his turn with others in holding services in the San Jose jail for the benefit of the prisoners. But he changed his occupation to that of a saloon keeper, and the was led to devise the dreadful scheme to murder two good citizens for their money, and got Jewell and Showers to Showers was put into State Prison for life, being half-witted. assist him, furnishing the liquor to influence them to do the dreadful deed.

May 24. Saturday. The S.S. children held a union picnic at the Buick church today, to which the Lodi and Woodbridge S. schools were also invited. The M.E.S. school of Lockeford, with Mr. Wolfe at its head, tired to be very pompous, and to spread itself considerably. And now, late at night, comes the dreadful news that Rev. Palmer's only son was fatally injured on the Narrow Guage train in going home from the picnic. Rev. Palmer is the M. E. pastor at Lodi and has five children, all of whom are girls, but this one son I believe he was about twelve years old. With many other children, he went to and from the picnic on the train, and it is supposed he tired to jump off before the train stopped, fell under the cars and was mangled. The parents went by buggy, so when they arrived home, there he lay nearly dead. O how dreadful! He lived only a few hours. So sadly ended a day intended only for pleasure.

May 25. Sabbath. A cloudy day with showers in the P.M. The Band of Hope which has met on alternate Sabbaths has now, for