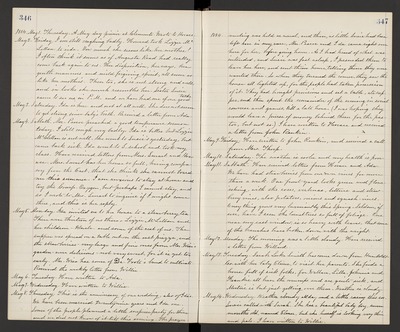 May 2. Friday. I am still coughing badly. Howard took Lizzie McLellan to ride. How much she seems like her mother! I often think it seems as if Augusta Read had really come back again to us. Her disposition, her ways, her gentle manners and mild forgiving spirit, all seem so like her mother's. Then too, she is not strong and well, and in looks she much resembles her. Sister Susie came to see us in P.M. and we have had one of our good talks.

May 3. Saturday. Ida is here and not at all well. She does not seem to get strong since baby's birth. Received a letter from Ada.

May 4. Sabbath. Mr. Pascoe preached a good temperance sermon today. I still cough very badly. Ida is better but Lizzie McLellan is not well. She went to Susie's yesterday, but came back sick. Ida went to S. school and took my class. Have received letters from Mrs. Smart and Horace, Mrs. Smart has her house so full, having company from the East, that she thinks she cannot board me this summer. I am anxious to stay at home and try the Comp. Oxygen, but perhaps I cannot stay, and so I wrote to Mrs. Smart to inquire if I might come there, and this is her reply.

May 5. Monday. Ida invited us to her house to a strawberry tea. There were thirteen of us there - Lizzie McLellan and her children - Uncle - and some of the rest of us. The supper was spread on a table out on the east piazza, and the strawberries - very large and fine ones from Mr. Wise's garden - were delicious - not very sweet, for it is yet too early. Mr. Wise has some of Dr. Foote's land to cultivate. Received the weekly letter from Willie.

May 6. Tuesday. Have written to Ada.

May 7. Wednesday. Have written to Willie.

May 8. Thursday. This is the anniversary of our wedding, also of Ida's. We have been married twentynine years and Ida one. Some of the people planned a little surprise party for them and we did not know of it till this evening. The prayer

1884. meeting was held as usual, and then, is little Susie had been left here in my care, Mr. Pascoe and Ida came right over here for her, before going home. As I had heard of what was intended, and Susie was fast asleep, I persuaded them to leave her here, and sent them home, telling them they were wanted there. So when they turned the comer, they saw the house all lighted up, for the people had taken possession of it. They had brought provisions and set a table, ate supper, and then spent the remainder of the evening in social converse and games, till a late hour. (I was hoping they would leave a purse of money behind them for the pastor, but not so.) I have written to Horace and received a letter from John Rankin.

May 9. Friday. Have written to John Rankin, and received a call from Mrs. Thorp.

May 10. Saturday. The weather is cooler and my health is poor.

May 11. Sabbath. Have received letters from Horace and Ada. We have had strawberries from our own vines for more than a week. Our front yard looks green and flourishing, with the roses, verbenas, lettuce and strawberry vines, also potatoes, onions and squash - vines. Everything grows very luxuriantly this Spring. Seldom, if ever, have I seen the locust trees so full of foliage. One near my east window, is so heavy with leaves, that some of the branches have broken down with the weight.

May 12. Monday. The morning was a little cloudy. Have received a letter from Willard.

May 13. Tuesday. Sarah Locke Smith has come down from Humboldt Co. with her baby Elmer, to visit her parents. She finds a house full of sick folks, for Wallace, Lilla, Johnnie and Frankie all have the mumps and are quite sick, and Mertice is but just getting over them. Weather is cloudy.

May 14. Wednesday. Weather cloudy all day and a little raising this eve. Susie called with Sarah. She has a beautiful baby boy, seven months old, named Elmer, but she herself is looking very thin and pale. I have written to Willie.