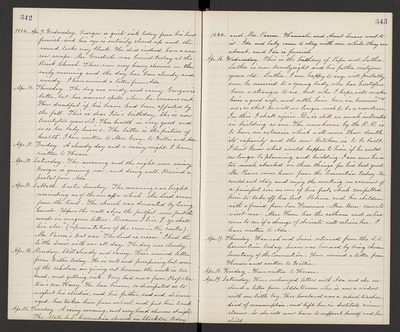 1884. Apr. 9. Wednesday. Georgie is quite sick today from his hurt, feverish - and his eye entirely closed up and the wound looks very black. He did indeed have a narrow escape. Mr. Wardrobe was buried today at the Brick Church. There were very heavy showers in the early morning and the day has been cloudy and windy. I have received a letter from Ada.

Apr. 10. Thursday. The day was windy and rainy. Georgie is better, but has nervous spells when he screams out. How dreadful if his brain had been affected by the fall. This is dear Ida's birthday. She is now twentytwo years old. Her health is very good and so is her baby Susie's. The latter is the picture of health. I have written to Mrs. Gray, to Willie and Ada.

Apr. 11. Friday. A cloudy day and a rainy night. I have written to Horace.

Apr. 12. Saturday. The morning and the night were rainy. Georgie is gaining now, and doing well. Received a postal from Ada.

Apr. 13. Sabbath. Easter Sunday. The morning was bright reminding us of the one which the Lord arose from the tomb. The church was decorated by loving hands. Upon the wall above the pulpit were put the words in evergreen letters. "Because I live [?] ye shall live also." "(representation of the cross in the centre). Mr. Pascoe's text was - "The Lord is risen." I had the little Susie with me all day. The day was cloudy.

Apr. 14. Monday. Still cloudy and rainy. Have received letter from Willie today. He is well and prospering but some of the scholars are giving out because the work is too hard, and getting sick. Very bad news from Prof. Norton's son Harry. He has become so dissipated as to neglect his studies, and his father, sad and discouraged, has taken him from school and put him to work.

1884. and Mr. Pascoe, Hannah and Aunt Susie went to it. Ida and baby came to stay with me while they are absent, and Ida is feverish.

Apr. 16. Wednesday. This is the birthday of Papa and Luther. Luther is now twentyeight and his father sixtyone years old. Luther, I am happy to say, will probably soon be married to a young lady, who has heretofore been a stranger to us, but who I hope, will make him a good wife, and settle him here in business with us, so that he will no longer wish to be a wanderer. In this I shall rejoice. Dr. is still as much interested in building as ever. The warehouse by the R.R. is to have an extension which will more than double its capacity and the new kitchen is to be built. I don't know what would happen to him, if he could no longer be planning and building. I am sure he is too much absorbed in these things for his best good. Mr. Pascoe came home from the Convention today. He could not stay and enjoy the meeting on account of a painful sore on one of his feet, which compelled him to take off his boot. Rebecca and her children with a friend from San Francisco - Mrs. Horn - came to visit me. Mrs. Horn has the asthma and so has come to see if a change of climate will relieve her. I have written to Ada.

Apr. 17. Thursday. Hannah and Susie returned from the S.S. Convention today. Susie was honored by being chosen Secretary of the Convention. Have received a letter from Horace and written to Willie.

Apr. 18. Friday. Have written to Horace.

Apr. 19. Saturday. Have exchanged letters with Ada and she enclosed a letter from Adda Brown who is now a widow with one little boy. Her husband was a school teacher, died of consumption, and left her in destutate circumstances. So she will now have to support herself and her child.