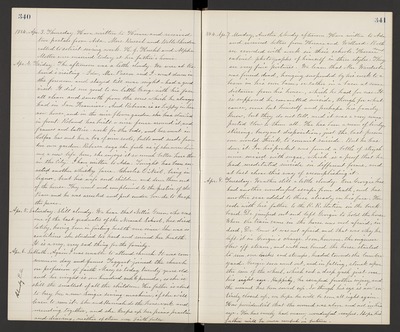 Apr. 4. Friday. The afternoon was a little cloudy. We were at Roland's visiting - Ida, Mr. Pascoe and I - went down in the forenoon and stayed till near night - had a good visit. It did me good to see little George with his face all clean and smooth from the sores which he always had in San Francisco. And Rebecca is so happy in her new house, and in the nice flower garden she has started in front. Roland has built a nice fence around it, and frames and lattice - work for the beds, and her aunt in Colfax has sent her a box of nice roots, bulbs and seeds from her own garden. Rebecca says she feels as if she were living a new life here, she enjoys it so much better here than in the City. I have written to Ada. Tonight has been enacted another whisky farce. Charles O'Neil, being in liquor, beat his wife and children and drove them out of the house. They went and complained to the Justice of the Peace and he was arrested and put under bonds to keep the peace.

Apr. 5. Saturday. Still cloudy. We hear that Nettie Green, who was one of the last graduates of the Normal School, has died lately, having been in failing health ever since. She was so ambitious she studied too hard and ruined her health. It is a very, very sad thing for the family.

Apr. 6. Sabbath. Again I was unable to attend church. It was communion day and James Taggart joined the church on profession of faith Mary is today twenty years old and her weight is one hundred and 6 pounds, so she is still the smallest of all the children. Her father is about to buy her a new Singer sewing-machine, if she will learn to run it. She and Hannah do the housework and mending together, and she keeps up her piano practise and drawing, neither of them very faithfully. Cloudy P.M.

1884. Apr. 7. Monday. Another Cloudy afternoon. Have written to Ada and received letters from Horace and Willard. Both are crowded with work in their schools. Horace sent cabinet photographs of himself in three styles. They are very fine pictures. We learn that Mr. Wardrobe was found dead, hanging suspended by his neck to a beam in his own barn, or rather in a barn at some distance from his house, which he had for use. It is supposed he committed suicide, though for what cause, none but himself and perhaps his family know, but they do not tell, and it was a very unexpected blow to them all. He has been a man of lively, stirring, buoyant disposition, just the last person one would think, to commit suicide. But he has done it. In his pocket was found a bottle of strychnine mixed with sugar, which is a proof that he had meditated suicide in different forms, and at last chose this way of accomplishing it.

Apr. 8. Tuesday. Weather still a little cloudy. Our Georgie has had another wonderful escape from death, and has another scar added to those already on his face. He rode with his father to the R. R. Station in the buckboard. Dr. jumped out and left Georgie to hold the horse. When the train came in the horse was not afraid, indeed, Dr. knew it was not afraid, and that was why he left it in Georgie's charge. Soon, however, the engineer blew off steam, and with one bound the horse started to run, over bushes and stumps, headed towards the lumberyard. Georgie soon went out, and in falling, struck upon the rim of the wheel, which cut a deep gash just over his right eye. Happily, he escaped further injury, and the wound has been sewed up. So though his eye is now entirely closed up, we hope he will be soon all right again. How providential that the wound was above and not in his eye. He has surely had many wonderful escapes. Hope his father will be more careful in future.