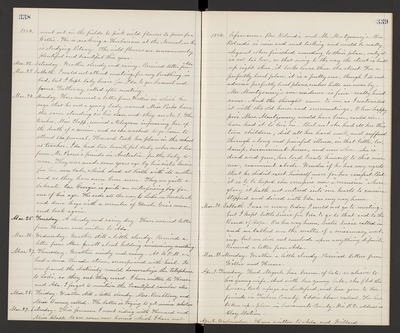 1884. went out in fields to pick wild flowers to press for Willie. He is making a Herbarinne at the Normal, as he is studying Botany. The wild flowers are uncommonly plentiful and beautiful this year.

Mar. 23. Sabbath. I could not attend meeting for my breathing is bad, but I kept baby Susie for Ida to go. Samuel and James Tretheway called after meeting.

Mar. 24. Monday. Have received a letter from Willie in which he says that he and a young lady named Miss Parks have the same standing in his class, and they are No. 1. The teacher, Miss Clapp, received a telegram informing her of the death of a cousin, and as she wished to go home to attend the funeral. Harvard took her place in the school as teacher. Ida had two beautiful baby robes sent her from Mr. Pascoe's friends in Australia, for the baby to wear. They were made some years ago by his sister Susie for her own babe, which died at birth with its mother and so they have never been worn. They are quite elaborate. Our Georgie is quite an enterprising boy for one of his age. He rode all the way to Lodie on horseback and drove hogs with a number of Uncle Geo.'s men, and back again.

Mar. 25. Tuesday. A cloudy and rainy day. Have received letter from Horace and written to Ada.

Mar. 27. Thursday. Weather windy and rainy. At 4 P.M. we had a severe thunder-storm, accompanied with hail. It was feared the electricity would demoralize the telephone to Lodi, so they cut the wires. I have written to Horace and Ada. I forgot to mention the beautiful rainbow also.

Mar. 29. Saturday. This forenoon I went riding with Howard and Miss Clapp to see some new houses which I have not

1884. before seen. Bro. Roland's and Mr. Montgomery's. Bro. Roland's is nice and neat looking and would be really elegant when finished according to their plan, only it is set too low, so that owing to the way the street is built up right there, it looks lower than the street. For a perfectly level place, it is a pretty one, though I do not admire perfectly level places, unless hills are near by. Mr. Montgomery's new residence is fine - really handsome. And the thought came to me as I contrasted it with the old house and surroundings, O how happy poor Mrs. Montgomery would have been, could she have had it to live in. But no! she had all her thirteen children, did all her hard work, and suffered through a long and painful illness, in that little, low damp, inconvenient house, and now when she is dead and gone, her lord treats himself to this nice, new convenient abode. Wonder if he has any regrets that he didn't exert himself more for her comfort. But it is to be hoped she occupies now a "mansion" whose glory "it hath not entered into" our hearts to conceive. Stopped and dined with Ida on my way home.

Mar. 30. Sabbath. It was so weary today I could not go to meeting, but I kept little Susie for Ida to go to that and to the Band of Hope. On her way home, Sister Susie called in and we talked over the matter of a missionary meeting, but we did not conclude upon anything definite. Received a letter from Ada.

Apr. 1. Tuesday. Tired. Megerle has become, of late, so abusive to his young wife, that with her young babe, she fled the house, took refuge in Lockeford, and has gone to her friends in Tulare County. Eddie Shaw called. He has taken up a place in Sacramento County. His. P.O. address is Clay Station.

Apr. 2. Wednesday. Have written to Ada and Willard.